The votes have been counted and artist Sally Strand has won the “People’s Choice Award” for her work at the recent Community Art Project (CAP) exhibit titled, “Pastels!” at City Hall. It was a tie between two of Strand’s pieces, “Man with Yellow Towel” and “Player Series No. 2.”

“Man with Yellow Towel” depicts a beachgoer with the accoutrements of a summer day at the beach, complete with a bright yellow towel. “Player Series No. 2” is a couple of lawn bowlers on a bench planning their next moves. Strand saw these scenes in Laguna and chose to recreate them in pastel. Her light and shadows bring the viewer a glimpse of summer life in Laguna.

CAP’s mission is to increase the visibility and appreciation of art and serve as a catalyst for art education. CAP provides an ongoing exhibition in the CAP Gallery, in the Rotunda Gallery space located on the second floor of the Wells Fargo Building, 260 Ocean Avenue. The CAP Gallery is a unique space for juried, solo and retrospective exhibitions.

Visit www.caplaguna.org for information about ongoing or upcoming exhibits. CAP is a 501(c)(3) nonprofit funded by the member supporters, lodging establishments and the city of Laguna Beach.

The JoAnne Artman Gallery, which opened in North Laguna as one of the few contemporary galleries in the neighborhood in 2008, is celebrating its 10-year anniversary.  A collector and lifelong lover of the arts, Artman opened her first gallery in the emerging arts district of Santa Ana in 2004. Today she also owns a gallery in the heart of Chelsea, New York.

Artman’s roster includes approximately 15 artists that embody all ages and ethnicities. Over the past 10 years, her gallery has grown into a thriving asset to Laguna’s long-standing arts community, having organized countless exhibitions and participated in numerous art fairs, contributing to a group of like-minded colleagues, artists and art lovers. 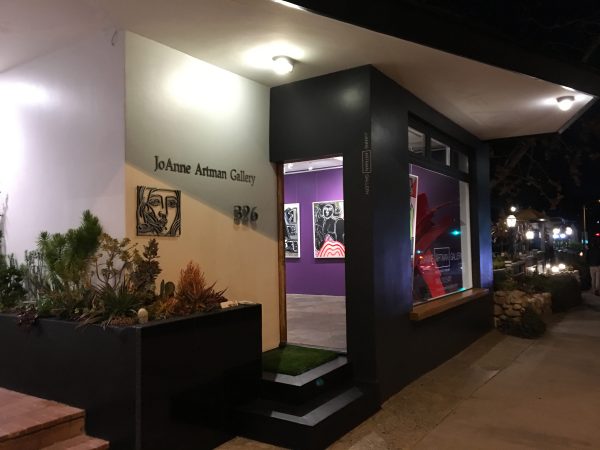 Domenica Fusaro’s sequined skirt matched one of her 12 oversized canvases on display at the mermaid building, Saturday, Aug. 4, when 150 guests were treated to an evening of hors d’oeuvres and custom cocktails by local Laguna Beach bartender, Adam Bernstein, at a reception for the artist whose work is inspired by her love of color, pattern and textiles.

A native of Cincinnati and a graduate of the University of Southern California with a bachelor’s in fine arts, Fusaro works and paints in Costa Mesa. For more information, visit DominicaDesign.com.