A proposal from Caltrans to raise speed limits on sections of Coast Highway received a skeptical response this past Tuesday from Laguna Beach’s City Council, which asked its Parking Traffic and Circulation Committee to thoroughly investigate the planned changes before the Council issues a formal response to the state agency.

Before the state agency unilaterally imposes a hike in speed limits, a municipality has the right to conduct a public hearing on the proposal. Caltrans is required to consider the results of the hearing, but even so, as Council member Steve Dicterow pointed out, “ultimately Caltrans has the final say.”

Darrylin Girvin, chair of the Parking, Traffic and Circulation Committee, urged the Council to press Caltrans to leave the speed limits as they are. “A lot of people are going way, way, way too fast through our community,” she said. 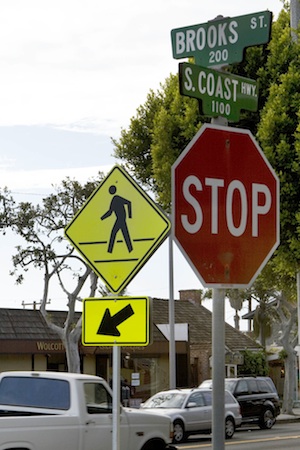 “We are very concerned about considerations to raise speed limits,” said Charlotte Maserik of Village Laguna, who asked the Council to consider the effect of higher speed limits on pedestrians and cyclists.

“I would say no to any increases,” agreed Council member Kelly Boyd.

Caltrans based their planned changes on results of a field survey and accident history along what becomes Coast Highway — state Route 1 in Dana Point – through Laguna Beach to Newport Coast Drive. Caltrans establishes speed limits based how fast 85 percent of drivers actually travel during ideal conditions. The speed limit is then set at the nearest 5 miles per hour.

Using this methodology, Caltrans wants to raise the speed limit by 5 miles per hour southbound from the northern city limits to Emerald Bay (to 50 from 45), from Emerald Bay to Wave Street (to 45 from 40), from Boat Canyon Drive to Aster Street (to 40 from 35), and from Hinkle Place to Catalina Avenue (to 45 from 40). Northbound they propose increases from McKnight Drive to Irvine Cove (to 50 from 45), and from Irvine Cove to the northern city limits (to 55 from 50).

Law enforcement officers can only use radar to ticket speeders when the limits are set according to that formula, said Mayor Elizabeth Pearson. “We want to be able to give radar tickets,” said Pearson. “It’s an enforcement tool.”

But the code allows for exceptions in some cases, as resident Liz Avalon pointed out. If road conditions are “not readily apparent to the driver,” Caltrans has the discretion to post a speed limit that is 5 miles per hour under the one traveled by 85 percent of the drivers, she said.

“We all agree that retaining lower speed limits is important for pedestrians, drivers and cyclists,” said Avalon, who proposed that cars entering and exiting gates to Emerald Bay, for example, could be considered a condition not readily apparent to drivers passing through the area and might give Caltrans the leeway to retain the current speed limit.

Public Works Director Steve May noted that Caltrans has already considered and applied such discretionary criteria in 15 of the locations they surveyed. For example, the Caltrans report shows an area between Fairview and Wave Street where they would have posted a limit of 45 miles per hour, based on traveled speeds. But they kept the limit at 40 miles per hour, citing higher than average accident rates, higher residential and business density and high volumes of pedestrians and bicycles.

“I would like to see more public input, and would like to see us build as strong a case as we can for not increasing limits, but in a way that we can still enforce them by radar,” said Mayor Pro Tem Bob Whalen.

The Council agreed and called for the Parking, Traffic and Circulation Committee to hold a hearing on the matter before the Council submits their comments to Caltrans.