After two years of discord between beach-front neighbors, Mark Towfiq says he sleeps better at night now, knowing that the rumble of bulldozers can be heard every morning at the property he owns above Rockledge Beach.

Last week, the county Superior Court ruled in favor of Towfiq and his wife Carol Nakahara, allowing them to demolish three old structures at 2425 S. Coast Highway to make way for a 9,500-square-foot home and garage that will partially obscure a neighbor’s view.

Despite the piles of rubble on Towfiq’s property indicating progress, the struggle between neighbors isn’t likely to end. Neighbors said they will continue to push for public access across Towfiq’s property at the state Coastal Commission meeting next week.

Wilson’s attorneys based their appeal on the lack of an environmental study of the project as required under the California Environmental Quality Act (CEQA), according to court records.

Due to certain permitted exemptions, though, the project did not require the environmental study nor could it be scratched due to blocked views, Bauer wrote in his decision.  The project was exempt because it is located in an area already urbanized and is not creating any greater environmental impact, according to his order.  The ruling also stated that the size and view of the home was inarguable because “the Towfiq house will be of approximately the same size as its two immediate neighbors, including, notably, the Wilson home.”

Bauer also dismissed the “unusual circumstances” of the project, as suggested by Wilson’s attorneys, referring to the three older structures on the property. He agreed with findings by the city and the previous owner that the buildings were not historically significant.

Eric Jessen, who works for Wilson, said public access to the beach across Towfiq’s property remains an unsettled issue.

“The overriding need is still for public access to the beach,” said Jessen, who worked 30 years for the county parks department, securing easements during development projects for public access stairways to beaches, including Thousand Steps and West Street.

Towfiq’s attorney, Sherman Stacey, called Jessen’s efforts moot. The Coastal Commission did not take any action to challenge the city’s approval of the project within the allotted amount of time, he said. “I don’t think it’s going to do them any good,” Stacey said. “The law doesn’t let the coastal commission go around telling people they have to give them access. The city has the first decision.”

Jessen said he’s relying on the city’s open space and conservation requirements in its general plan, which requires coastal access every 1,000 feet.  He said the closest access to the Rockledge beach below Towfiq’s property is either at Moss Beach or Victoria Beach, 3,000 feet apart.

“It’s been two years of just hell for me,” Towfiq commented.  “It’s been really rough on my family, this whole fight.  We feel the case is over. Right now, I don’t know what they could really do.  My attorney says their case is over because we destroyed the homes.” 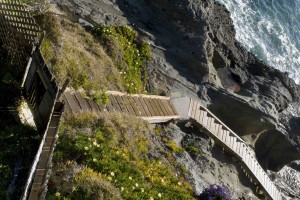 Jessen said he’s appealing to the 3,150 people he said signed a petition last spring to keep Rockledge beach open to the public to join him at the Coastal Commission meeting Wednesday, Nov. 2, in Oceanside. The small sandy cove below Towfiq’s property is accessible at lower tides by a wooden staircase.  The staircase is on Towfiq’s property and is privately opened.

“I don’t think it’s over yet,” said Jessen.  He said his group is hoping that the Coastal Commission will require Towfiq to allocate a strip of land for a public stairway.

But Towfiq says the underlying contention between the property owners has nothing to do with beach access or ocean views, but a commonly owned driveway. The driveway is shared with his two northerly neighbors, who use it as a second utility and service access behind their homes, a supplement to their main driveway.

“For all this time, it’s just the driveway,” said Towfiq.  The driveway, agreed Fred Talarico, a project director with Vista Community Planning who is also representing Wilson, is a major point of contention.

Talarico said it’s not only needed for public beach access but for safety as well, especially during construction.  “I don’t know how many dump trucks and cement trucks are going to go in and out of there,” he said.  “They’ve never told anyone how they’re going to build the site.”

Talarico suggested that Towfiq lay a second driveway, as his neighbors have done.  He said Wilson requested that Towfiq’s design for his house include a separate driveway directly to his property from Coast Highway so that the current driveway could continue to be used as it is now, a secondary access for pick-up and drop-off of groceries and supplies, guest parking and worker entrance and exit.  Towfiq’s design includes no other driveway but the existing one, which is now being used by bulldozers.