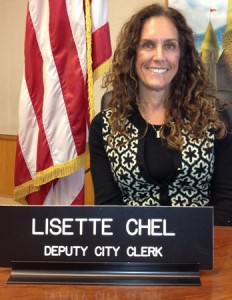 Deputy City Clerk Lisette Chel announced her candidacy for Laguna Beach’s city clerk last week, a position held by only two people since 1976 that is currently held by incumbent, Martha Anderson, who will not run for re-election.

If she wins, and so far she is unopposed, Chel will continue a tradition of city clerks who have devoted most of their careers to the city.

Chel, a resident of 33 years, worked 25 years in the city police department before assuming the post of deputy to Anderson in 2008.

Anderson, for her part, worked eight years between the city’s finance and personnel departments and the zoning department before serving for five years as deputy to then City Clerk Verna Rollinger. She won the post outright in 2004 when Rollinger retired and was subsequently elected to the City Council in 2008.

Rollinger set the record for longevity by serving as city clerk for 28 years.

Though she has “thoroughly enjoyed” her tenure, Anderson said she made the decision to retire after reaching a point in her life when she’s ready to relax more and pursue other interests. More reading and golf are on the menu, but she also hopes to feed her love of animals by volunteering at the animal shelter and by spending more time with her own two dogs. She would also like to volunteer at the Senior Center and participate in their activities. Time permitting, she’s even interested in part-time work at City Hall or elsewhere, if the opportunity arises.

Anderson encouraged Chel to announce her candidacy. “I support her very strongly, and I cannot begin to say what a pleasure it’s been working with her for the last four years,” said Anderson. “She’ll do a great job.”

In addition to her tutelage under Anderson, Chel she was certified in 2010 by the Institute of Municipal Clerks and is currently working toward master municipal clerk status.

The job requires wearing a number of hats. Responsibilities include maintaining public documents and records, providing administrative and support services to the City Council, recording council proceedings, overseeing elections and ensuring the city meets regulatory requirements, to name a few.

Work at the police department for Chel included fielding complaints from the public and compiling month-end reports and parking statistics, before the latter were outsourced.

In Laguna, the city clerk is the one full-time city employee who is also an elected official, earning a monthly salary of $10,312, which includes five percent exceptional performance pay.

Anderson emphasized the city clerk’s workload. “You really have to be available all the time,” she said, admitting to putting in long hours and including Saturdays to keep up with tasks needing attention. In addition to the official duties of the position, the city clerk seems to be regarded by the public as the default information source. Anderson and Chel are constantly fielding calls and requests from residents who don’t know where else to turn, and, thanks to their years of experience, they are usually able to point them in the right direction.

So much of the position is dealing with the public, said Anderson. Fortunately, she said, “Lisette is probably the best human relations person I’ve ever met.”