With an overflow crowd in the high school’s 444-seat Artists’ Theatre, eight panelists presented some hard facts about using drugs, even once.

The presentation on Monday was designed to persuade teens to reject opportunities to experiment with drugs, even prescription drugs, and scare them with facts, personal experiences and life stories about consequences such as ending up paralyzed, comatose or dead.

The panel included an Orange County criminal court judge, a sheriff’s deputy, a probation officer, a documentary film producer whose son died from an overdose as well as three former drug-users.

After the presentation, a parent pointed out a missing component from the panel, a therapist who could delve into what underlying issues – a lack of nurturing or insecurities — cause kids to use dangerous drugs, rather than the panel’s focus solely on drastic consequences. 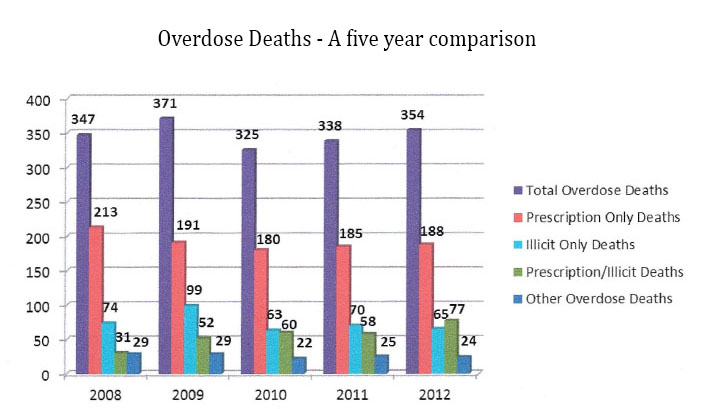 The audience seemed riveted as dark-haired and brightly smiling Aisha Armer walked out on stage after they had seen her telling her story about a one-time, coma-inducing encounter with Ecstasy in the opening documentary, “Overtaken.”

“I was a normal kid just like each and every one of you,” said Armer, her speech slow and deliberate, still slightly impaired from the coma. “I went to Santa Margarita Catholic High School. I was on competitive cheer for 10 years. I was not a druggy. But I wanted to experiment with my friends.” She stood behind a barricade of drug paraphernalia collected in south Orange County schools.

Armer took Ecstasy once at a rave and overdosed. She recovered from the coma, requiring a wheelchair until she learned to walk again. “I just thought my parents would bail me out if I got in trouble,” she told the audience, many of them parents.

“But when I was laying there in a hospital bed pretty much dead, how can my parents help me out of that? They can’t. Everyone just needs to make smart choices. I was that normal kid. I didn’t crave drugs. I never went out looking for drugs. They just landed in my lap.”

Armer is now studying communications at USC. “Many of the kids never had the chances you have, so don’t ruin it for drugs,” she said. “I hate to say this happened to me for a reason because it was a horrible thing but I’m actually glad because I learned who I was. The easy thing is don’t do drugs.”

High school assistant principal Bob Billinger introduced the panel, most of them professionals working with illegal drug use. “Drug use is far greater than we’ve ever seen before,” said Billinger, who’s been at the high school for nine years. “I don’t want a phone call telling me that we’ve lost another student. It’s preventable. That’s why we’re here tonight.”

Teens aren’t always buying from dealers on street corners. Mike Ritter, emergency services medical director for Mission Hospital, described the inventiveness of two girls who came to the ER with overdoses. They would dress nicely and go to realtor open houses, following a couple inside. Once in, they would steal pills, not the bottle, from the bathroom medicine cabinet.

Ritter cited figures showing that 80 percent of illegal drug use in South Orange County is due to abuse of prescription drugs in the hands of teens and young adults, pointing out the false belief that they’re safe because they were prescribed by a doctor.

The young people typically take several pills and then drift off to sleep because of the strong narcotic effect. “The medication’s strength peaks and they overdose in their sleep,” Ritter said, “and are found dead in the morning.” He asked adults to dispose of prescription drugs instead of keeping them indefinitely. Ritter said another false belief is that marijuana isn’t necessarily addictive.

Heroin, often as much as 30 percent pure on the streets now, is also on the rise and more damaging than it used to be, Ritter said. “We’re seeing heroin overdoses every day at the ER,” he said, reversing a slowdown due to the fear of sharing hypodermic needles during the onset of the AIDS epidemic in the early 1990s. Users lapse into a coma and stop breathing. “You don’t know if it’s going to be a lethal overdose or not,” he said.

After the presentation, several students said they appreciated hearing the real-life stories that help them make self-aware choices. But the audience also took exception to what some considered scare tactics.

“Telling kids you’ll put them in jail is not the answer,” said town elder Bruce Hopping, 92. “I was imprinted as a little boy to regard the body as the most beautiful creation. You don’t damage that. It wasn’t that I was going to be thrown in jail or beaten up by some deputy,” Hopping said to applause and hoots of support.

Grace Wellsfry, a ninth-grader and incoming sophomore class president, rejected the idea that drug use is due to social pressure. It’s pressure, period, she said. Pressure at home, pressure at school, pressure to perform. And pressure about looks in an image-focused culture.

“A lot of the parents do it, too,” she said, referring to marijuana and the excessive use of prescription medications and alcohol. “A lot of people say, ‘Oh, it’s the money here’ but it’s not just the money. It’s the people around you.”

It’s not enough to say no to drugs, said deputy sheriff Brian Gunsolley. “It’s time to get angry with people who use drugs and with anyone who tries to get you to use drugs, too,” he said. “We need to look after each other by discouraging drug use.”