Retired UC Irvine faculty members and Laguna Beach residents Margot Norris and her husband, Rowland Davis, teamed up five years ago to write mysteries together. “We’re obviously not in this for the money,” Norris said, referring to the $2.50 in royalties earned by their first novel, “Murder at Astron Bay,” released in 2009.

Their second novel, “Death in Laguna Beach,” published in August, might top that if the couple amps up their informal marketing strategy of dropping off books at the homes of friends who tout the book in online reviews, perhaps getting some shelf place in local shops and holding a book signing.

A professor of English and comparative literature who carved a niche for herself as a James Joyce specialist, Norris, 68, is the author of scholarly volumes delving into the processes of creative writers, including most recently “Virgin and Veteran Readings of Ulysses” (Palgrave Macmillan, December 2011). She evinced no desire to create her own fiction.

Not so her husband, a professor emeritus of molecular biology and biochemistry, now pushing 79. An elective creative writing class at Harvard years ago stayed with him. He fostered a dream of returning to the art upon retirement, though he envisioned a higher literary plane than the popular murder mystery.

The couple follow the footsteps of other local husband and wife writing teams, including Hal Toliver, another UCI professor emeritus, and his wife Mary, a retired teacher, who have written a series of mysteries with amateur sleuth Bea Ellis as their protagonist, two of which take place locally, including “Pageant of the Mortals” (PublishAmerica, 2007). Also Gloria Fickling and her late husband Forrest (“Skip”) who wrote a series of crime novels under the pen name G. G. Fickling, beginning with “Honey West: This Girl for Hire” in 1957.

Local writers are no rarity in Laguna. About 50 authors or aspiring authors inquire about book-signing or sales opportunities each year, said Laguna Beach Books owner Jane Hanauer. Mysteries and thrillers  account for about 10 percent of sales, and ones with a local hook sell better, she said. When mystery writers unfold their plots in places they know well, their novels become “a great way for a reader to have fun and learn about an area at the same time,” she said. For vacationers, such mysteries serve the dual role of travel guide and recreational reading. 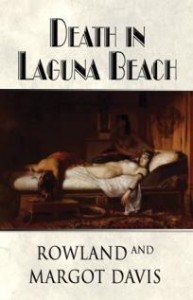 Passing the time with a copy of “How to Write a Killer Mystery” during a long trip, Norris played with the tome’s advice of figuring out a good setting and chose a favorite vacation spot in Crete. For fun, she sketched out a tentative plot, effectively launching her journey into literary sleuthing.

Returning home, she offered her musings to her husband, who after maintaining his disinterest in the project, went on to try his hand at a few pages, handed casually to his wife with a “see what you think.”

As it turned out, he’d already conceived a well-rounded main character, Red Redfield, along with his wife Sophie. “It was witty and clever, and I was hooked,” said Norris. They soon discovered their individual strengths and moved forward.

While her spouse had a talent for creating characters and giving them a true voice, she proved adept at developing a beginning, middle and end and driving the plot forward.

“Rowland loved writing it,” said Norris. After a year’s work and final revisions, by 2008 they began seeking an agent and a mainstream publisher. Those plans, however, were scuttled when Davis suffered a stroke.

With life’s uncertainties looming, Norris set out to get their words in print as soon as her husband returned home from rehab. They went with on-demand publisher PublishAmerica.

“Murder at Astron Bay” (a twist on Crete’s Istron Bay) currently boasts 13 reviews on Amazon, most submitted by friends and UC Irvine colleagues, though not all.

The couple presciently built some foreshadowing into the first novel by allowing one of the antagonists to flee. The tagline, “But that’s another story,” provoked its readers into inquiring about a sequel.

Since Davis’s health now precludes travel, they set their latest mystery in their exotic hometown, where the couple has lived since 1975 and 1993, respectively.

Readers will easily recognize landmarks despite a slight alteration of names in cases where Norris thought the real business owners might take offense to unsavory events that transpire there. The Brooks Street surfing contest even plays a role.

They insist their characters are fictional, nor are they the model for the Redfields, though they do share some of their traits. The Redfields’ Dachshunds provide the only exception, as their Ezra and Gertie bear a striking resemblance to the writers’ own Dusty and Misty.

Still, local readers will have fun identifying with some of the characters, including a Russian chemist and his Hungarian wife, a Swiss millionaire, a gay neighbor, a couple of local teenagers, and a plein air artist living in a trailer in the canyon.

While the writers omitted foreshadowing a subsequent plot line in “Death in Laguna Beach,” they haven’t ruled out a third mystery. If there is a third, Norris said she’s considered giving Red a disability. He’s fat and eats a lot, so a stroke might work, allowing them to incorporate some of her husband’s experiences, though, for the record, Davis is tall, lean and eats moderately. 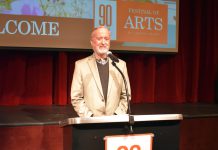 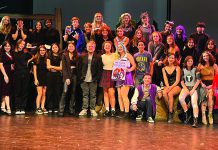