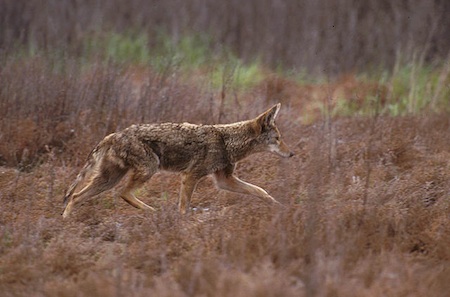 In neighborhoods bordering Laguna’s wilderness, there’s a natural echo you often hear when fire engines answer a nighttime call.  The primal, high-pitched yips, yaps, yelps and howls of coyote packs riled by such urban sounds as sirens, alarms and domestic dogs send shudders down the spines of pet owners all over Southern California. Our local folklore is full of true stories about coyotes snatching cats from backyards in broad daylight, following dog walkers, and silently observing dogs at play.  Lost cat signs are an everyday part of our urban landscape.

As a new resident, I was told to keep my outdoor cat indoors. After he managed to escape and (predictably) disappeared, a friend told me she’d heard there were caves near Top of the World full of pet collars and tags.  It’s a legend I’ve never been able to confirm, but an image that’s difficult to forget.  On the top of the heap: A frayed baby blue collar and a round metal tag engraved with my cat’s name.

Unlike wolves, whose numbers have declined with human population growth, coyotes’ range has expanded far beyond prairies. Coyotes have established their territory in even the most developed places. Biologists recently documented 200 coyotes living successfully in Chicago’s industrial parks and skyscraper canyons, thriving on a diet made up mainly of rodents, Canada geese and their eggs.

In Chicago as in Laguna, coyotes try to avoid human contact. You can help keep coyotes wild by feeding pets indoors and bringing them inside at night, closing trashcan lids and properly disposing of litter. In the rare event that you do see a coyote, don’t run. Give it space and consider yourself lucky to have seen it. Left to follow their natural hunting patterns, coyotes will maintain their natural fear of humans, help control wild rodent populations and leave dogs and cats alone.

Opinion: November, You Are So Laguna