Southern California Edison’s “routine” replacement of two utility poles in Bluebird Canyon was anything but routine for the residents of 50 nearby homes. They received mandatory evacuation orders prior to Wednesday’s extraction by helicopter of two utility poles located behind properties on Wykoff Way.

Despite the mandatory evacuation notice, Bluebird Canyon Drive resident Lori Solomon said she was caught off guard because she assumed that Wednesday morning’s intermittently gusty winds might keep the copter grounded. So when a worker knocked on her door to give her a 15-minute warning at around 10:30 a.m., she had to scramble to get out the door in time.

Solomon received written notice a couple of weeks before and SCE representatives went door to door last week to make sure residents understood they would need to temporarily evacuate their homes between 9 and 11 a.m.

Laguna Beach Public Works Director Steve May said the evacuation protocol stemmed from Federal Aviation Administration guidelines. FAA rules prohibit aircraft from flying lower than 1,000 feet in congested areas. However, helicopters may fly lower “if the operation is conducted without hazard to persons or property on the surface.” Ergo, the temporary evacuation order.

Because of the difficult terrain, the poles had to be removed by helicopter, rather than by crane, with Flamingo Road designated as the landing pad.

SCE workers closed roads into the area by 6 a.m. The actual work began closer to 10 a.m. 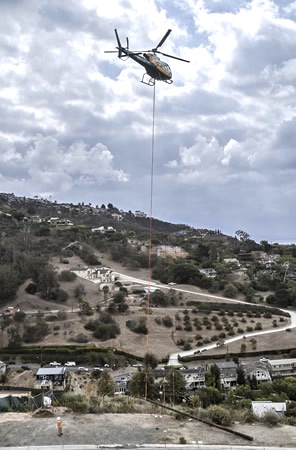 Solomon said workers were adamant that “absolutely everyone” must be out of the area before the helicopter work began. When she posed the hypothetical question: what if she had been bed-ridden and couldn’t leave, they said they would have postponed the work. Since she was fine, she went for a coffee in town and returned to park nearby and watch the whirlybirds in action. By noon workers reopened the streets.

Though the SCE spokesperson said the work order resulted from routine infrastructure inspections for safety and reliability, the replacement of the poles, deemed old and deterioriated, comes just two months after a study showed that 22 percent of Edison’s poles failed to pass one of several safety measures.

At the direction of the California Public Utilities Commission, SCE hired an independent contractor to inspect a random sample of poles, including those owned by the utility outright and those owned jointly with various telecom providers. Inspections and load analysis on 5,006 poles and found that 1,116 fell short on one or more safety factor including bending failures, buckling failures and unsafe guy wires. According to an NBC news report, that means SCE has about 300,000 poles to repair or replace, a process estimated to take up to a decade.

The study results highlight concerns about SCE’s maintenance practices at a time when the electric company has come under public scrutiny for potential liability in a number of incidents, such as when almost 250 SCE poles fell during a 2011 windstorm that resulted in power outages in the San Gabriel Valley. And authorities blamed unsafely overloaded SCE poles that snapped in high winds for a 2007 Malibu Canyon wildfire.

Closer to home, when a brush fire broke out last September next to Laguna Terrace mobile home park, witnesses claimed to see smoke emanating from a downed utility pole on the hillside just north of the park. And while Southern California Edison did not officially accept any blame for the incident, the company did reimburse the city for all costs related to the fire, according to City Manager John Pietig.