With an already-distressed habitat, and not much of it left, park rangers and trail managers for Laguna Coast and Aliso-Wood Canyons wilderness parks are making haste to prepare for predicted heavy rains.

The parks are being prepped for erosion.

Of the 42 miles of trails, 21 miles are high-traffic, often deeply rutted, single-track paths used by bicyclists and hikers. “There’s so few miles of single-track trails and there’s a huge demand to use those trails,” said Alan Kaufmann, Laguna Canyon Foundation’s trails restoration manager.

To bolster the trails for forecasted El Nino rainstorms, dirt-bagging, berm-building, water diversion and new bridges are being put into place.

“The trails are so different here,” said Kaufmann, who restored trails and habitat for the Arizona Conservation Corps for the past six years. “There’s no rock and there’s no trees.”

Without handy rocks and logs to cut from trees, Kaufmann and Mike Hall, the foundation’s trail coordinator, along with dedicated weekend wilderness warriors, are loading burlap sandbags with dry, loose dirt to sculpt the trails later. They call it dirt-bagging.

“With people riding bikes and walking back and forth in the dry season,” said Kaufmann, “it loosens all that dirt.” Mountain-bikers dubbed the fluffy dust “cake mix.” 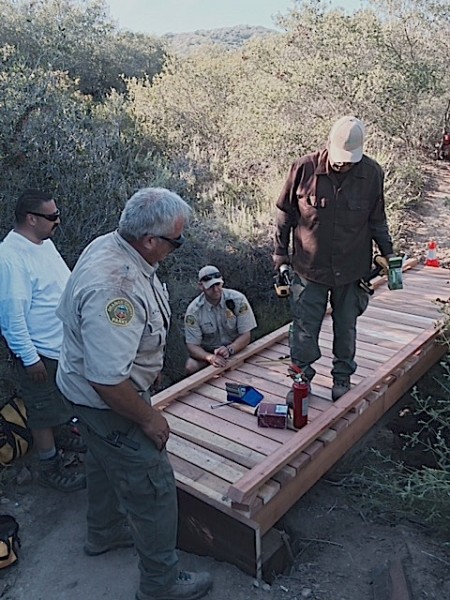 “The first time it rains, all that dirt washes off the trail and it’s gone. And the trails get more deeply entrenched.” When it’s raining, and for two days after, hiking and biking are highly discouraged by the park service to prevent further erosion.

Dirt, said Kaufmann, has become a commodity in a designated wilderness where rocks and trees along with every plant and animal are protected. “So when it does rain, all that dirt in the burlap bags gets nice and wet and we can sculpt with it and build structures with it.”

In other areas of the parks, ditches, culverts and drains are now free of debris, said Barbara Norton, Laguna Coast’s head ranger. Norton supervises the 12,000 acres of Laguna Coast and Aliso-Wood Canyons, which includes the once-abundant 12-acre Barbara’s Lake, now cracked and dried from the drought. The lake is one of three there, which are Orange County’s only natural lakes.

“We’ve inspected all the bridges so they’ll be able to withstand any kind of heavy rains,” said Norton. Three new wood bridges in Aliso-Wood Canyons were built by Orange County Parks, which oversees the wilderness areas.

The 14 acres that burned at Canyon Acres in Laguna Canyon on July 3 is also receiving special attention. Wood planks pounded into the ground will slow water down. “We’ll inspect those throughout the storm season,” said Norton, “to keep them free of debris.”

Protecting the fifth namesake oak tree on Five Oaks Trail in Wood Canyon has become another top priority project for Kaufmann and his team. Once off the trail, the oak now stands as an island due to bi-pedalers going around both sides, said Kaufmann, and its roots are becoming exposed.

To cover the roots and stabilize the tree, volunteers packed “cake mix” inside a retaining wall built with cinderblock segments each weighing 67 pounds. “We hauled 100 of them up Five Oaks Trail,” said Kaufmann. “We’re trying to make sure Five Oaks Trail doesn’t become Four Oaks Trail.”

In a recent five-year period, in Laguna Coast Wilderness alone, the number of park visitors tripled from 100,000 to 300,000, Kaufmann said. And some of them are a peculiar kind of wreaking crew.

It’s easy to make a trail here, said Kaufmann. “You just walk over the vegetation a few times and there’s a trail because it’s so fragile, especially in a drought like this.”

“Because coastal scrub grows on the hillsides near the ocean, most of it has been destroyed with development so it’s also very rare now,” said Kaufmann. The Laguna Greenbelt, which encompasses the 22,000 acres that make up six different open space and wilderness parks, protects one of the largest patches of intact coastal sage scrub in Southern California. Up to 90 percent of Southern California’s coastal sage scrub has been destroyed, according to the California Coastal Commission. Nearly 100 species of plants and animals indigenous to coastal sage scrub are currently classified as rare, sensitive, threatened or endangered by federal and state agencies, including the much-heralded and threatened California gnatcatcher.

“In other places, if the trail is deeply eroded, you can just close that trail down and reroute the trail to make it more sustainable,” Kaufmann said. “Here, you can’t do that. You’re stuck with the current alignment; you can’t just shut it down.”

Even though countywide red-flag fire warnings were issued in November, a little rain that came with two brief storms last month, goes a long way in a semi-arid climate, said Norton. The north-facing hillsides look lush, plants are growing and some are even blooming. “They can’t decide what season they’re in,” she commented.

With National Weather Service forecasts now call for heavy rainfall sometime in late December or early January, maybe later. If and when it comes, the parks are ready, Norton said. “This weather’s beautiful, but I’d like to see Barbara’s Lake full again.”