Santa Claus temporarily took up residence at the corner of Forest Avenue and Glenneyre Street in a tiny abode known as Santa’s Hut. Frequented this time of year by wide-eyed kids and cheerful adults, the festive street corner also serves as a rendezvous spot for families selected for the annual Adopt a Family drive and their sponsors. There, compassionate givers spill their sacks well before Dec. 25. Re

Adopt a Family, founded by local activist Sande St. John and numerous friends, hopes to help roughly 40 families this year as they have done for 19 years, said Marsha Bode who works in close tandem with St. John. While 15 families have been adopted, volunteers are still needed for 25 more, she said.

Families are selected from among low-income students in the Laguna school system, said 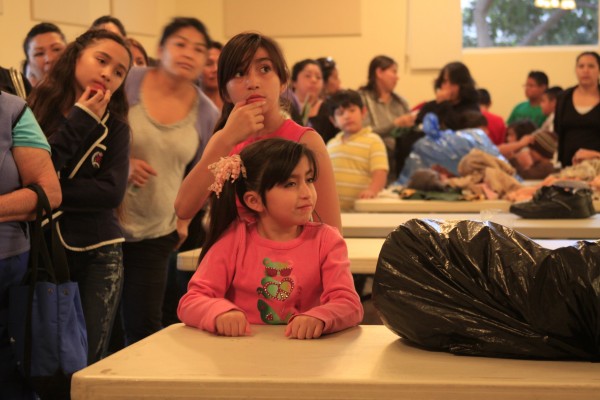 Bode, who noted that winter months are often difficult for local hotel workers, whose hours are cut as tourism shrinks.

The process of adopting a family for the holidays has evolved from separate food and clothing drives into an organized process where families applying to be adopted can fill out wish lists of needs and wants. Clothes and shoes rank high along with popular toys. Electronic gadgets are discouraged and even though an occasional X-Box or iPad winds up on a list, kids trend toward bikes, scooters, a good soccer ball and, of course, Barbie and her colorful pals, remarked Bode.

“What tends to change is the brands kids want. This year it’s from Adidas and Nike back to Converse high tops,” she said. While fantasy characters hold sway, Legos also are making a comeback, she said.

wrapping, at times delivering the gift themselves, but more often meeting up at neutral places like Santa’s Hut.

“At Christmas time there seems to be such a tremendous need,” said local resident Heidi Miller, who owns two downtown stores, and recalls making community Christmas donations since 1981.

She’s handed out grocery gift cards to restaurant employees and done small things for people juggling multiple jobs and multiple children. Her philanthropy evolved into adopting entire families three years ago. “I’ve kicked it up to three now,” she said. Gifts include, besides presents for kids, gift cards and movie passes and gift certificates for moms from Tight Assets, her popular clothing boutique.

Last year, she recruited a nephew, highway patrol officer Todd Kovaletz, who drove up to Santa’s Hut in a patrol car laden with gifts for her charges. He’s eager to do it again this year, said Miller.

She said that she is working closely with St. John. “Sande gets to the core of it; it makes mine and everyone’s job so much easier.”

“It’s gone through generations now,” said Pauline Walpin, a member of St. John’s group, whose son also assists the cause.

Walpin, like most, is a member of the Laguna Beach Woman’s Club, which hosts back to school and Christmas “parties,” like the one held this week, where low-income families are invited to “shop” among tables of donated clothing, toys and housewares.

Jessica Medina recalls being part of an adopted Christmas family for most of her life. Growing up in South Laguna, she and a brother shared a tiny apartment with her parents and two other families.

“We could not afford a tree but we could have Christmas through the family program,” she said. “My brother thought Santa was part of the program,” she added.

Now 27, she holds an administrative job with an Irvine restaurant company and is married to Richard Estrada, a local mechanic. The couple’s children are 10, 5 and 3.

“I look back now on how I grew up and don’t want my children to have the same experience, but I still thank the people who adopted us back then and who brought gifts and baskets of food. They filled the emptiness we would have had during the holidays and we were happy all year,” she recalled.

Now she helps out by connecting families to Adopt a Family and hopes to be able to adopt one on her own soon. “I never forget where I came from, but now I am trying to fulfill my dreams and that includes giving back,” she said.

Cindy Prewitt, another local resident and longtime volunteer, got involved with the program when her own children were young and got them involved as well. “Laguna is a giving community and I hope we can encourage other families to take part,” she said.

Another Adopt a Family anchor is Louise Buckley, 92, who has volunteered with St. John for 14 years. “I’ve been volunteering all my life; it’s given me happiness that still keeps me going,” said Buckley, who on Tuesday handed out plastic bags to the women and children awaiting Santa’s arrival and their chance to select from among the donated goods.