Laguna met Woodbridge last Friday on Guyer Field for the first time in 32 years and the contest match the similar games from the 1980’s series.

The event began with both teams exchanging punts but on the Breaker’s second possession, a Luke Degner40-yard punt return gave the hosts great field position. Still Laguna could not move with their drive ending on the Warrior 19. Woodbridge then connected on a third down 84-yard pass play for the only score of the first half.

Breakers had two first half possessions end on interceptions while Aidan Mulkay intercepted a long Woodbridge pass in the second quarter. Off Mulkay’s catch, the Breakers drove 46 yards only to have their drive stall on the Warrior 29 yard-line.  Woodbridge then came back on their final possession of the half but missed on a 38-yard field goal try as time expired.

Woodbridge had the ball to start the second half but were forced to punt after three plays. Luke Degner then took the kick 52 yards for his second punt return touchdown for the season but the point after try failed.

Laguna stopped Woodbridge again on three downs and the Breakers responded with a 70-yard six play drive that ended with a great pass to Jacob Diver for the score. Breakers 2-point conversion try fell short giving the squad a 12-7 lead.

Laguna’s third possession of the quarter ended fast as Will Bingham hit Diver on an 80-yard pass play that extended the lead to 19-7 after Ziggy Moltari’s kick.

Woodbridge closed the gap in the final period after some bad snaps on Laguna’s three consecutive fourth downs resulted in non-punts for Laguna. The first one gave Woodbridge the ball on the Laguna 6 for a one-play score.

The second Woodbridge possession ended on the Laguna 14-yard line when Luke Degner recovered a Warrior fumble. Laguna’s third possession ended with Dylan Sprague taking a safety rather than a blocked kick after a third straight high snap.

With the score 19-16, Laguna was required to kick-off from their 20-yard line and with a 23-yard return, the Warriors started their final drive at the Laguna 42. Five plays later and stalled on the Breaker 10, the visitors tied the score on a 27-yard field goal.

Breakers recovered the ensuing squib kick-off on their 34-yard line and from there Will Bingham ran a near perfect 2-minute drill taking the Breakers down field on six of seven pass attempts. The final pass with five-seconds on the clock was a blind toss perfectly saved by Jack Arntz for the victory. The clock gave Woodbridge one last try with the required kick-off but the visitors fumbled the return that Jeremy Kantor recovered to end the contest.

UP NEXT:  Breakers will host Crean Lutheran (1-3)  on Sept. 17 at Guyer Field for the schools’ first meeting.

Breakers are at the Woodbridge Invitational this weekend with the run scheduled at a very fast course at Silver Lakes Sports Complex in Norco.

The Boys fell out of the Top 10 this week but will see four of the rank teams in this event. The polls don’t really matter until mid-October. Laguna’s girls team will be facing two top-ten teams in their run.

Missing a key singles player and heat issues sank the Breakers in a 13-5 loss at Aliso Niguel on Sept. 9.

The Breakers are off until they travel to Huntington Beach on Sept. 23.

Breakers finished third at the 16-team Santa Barbara Invitational going 3-1 in the tournament. Laguna opened play on Sept. 10 at Dos Pueblos with a 20-7 victory over Monte Vista (Danville – No Coast CIF). Will Kelly had seven goals, Sai Bassett five and Cade Anderton with four scores to lead the way. That evening, Holden Seybold scored in sudden-death overtime to lift Laguna to a 10-9 upset of Loyola.

On Saturday, Laguna was no match for eventual champion Huntington Beach losing to the Oilers 16-9 in a contest played at Santa Barbara High School. Later in the day, the Breakers defeated Brunswick School from Greenwich CT 13-12 in overtime with Will Kelly delivering the winning shot.

Prior to the tournament, Laguna lost a 15-6 non-league game to Harvard-Westlake on Sept. 9 at the Wolverine’s Studio City pool.

Prior to the tournament, Laguna lost a 15-6 non-league game to Harvard-Westlake on Sept. 9 at the Wolverine’s Studio City pool.

This weekend, Laguna is seeded ninth in the 30-team South Coast tournament. Breakers opened play this past Thursday facing Edison (4-1).

Since the last report Laguna has played eight matches starting with a 25-21, 25-19, 25-11 win over Sage Hill on Sept. 8 at Dugger Gym. Laguna was able to play everyone against the Lightning with some great play by the bench.

In the critical fourth set, the umpire and the score desk messed up the scoing and would not correct their errors. Although the score is listed as 28-26, the video clearly shows the actual results was 29-25 Laguna and the contest should have ended at 26-24. Breakers held on with the decisive fifth set victory as Sydney Freeman closed out the match victory with two straight services aces. For the match, Sophie Reavis had 26 kills and three aces while Natalia Hagopian had 13 kills, 22 digs and 41 assists. Brooklyn Yelland and Freeman each had 12 kills and Freeman had a team high 4 service aces.

Looking for the latest Laguna scores, rosters, and schedules?

Visit the Athletics department website at lbhs.lbusd.org/athletics/teams for the updated schedules and where the scores get posted first. 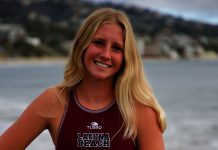