COACHING CHANGES
TENNIS
After six seasons at the helm of Boys Tennis and five seasons with Girl Tennis, Rick Conkey is giving up the post as head coach for Laguna Beach High School but is not leaving the local youth tennis development in Laguna. He still plans to conduct the summer tennis camp programs for ages 11 and older through Laguna Beach Recreation Services from June 13 through Aug. 18.

Conkey went 63-33 with the Boys winning three league titles and two second place finishes. His promising 2020 squad was 5-0 in non-league before the season ended due to COVID-19. His 2018 squad won the Division 4 CIF title.

GIRLS GOLF
Jon Hendrickson resigned after six seasons with the Girls Golf program. His 2017 squad won the Orange Coast League and after the 2018 jump to the Sunset Wave League competition, his squad last fall split their league matches with Newport Harbor for a third-place league finish. Stepping in for 2022 will be Boys Coach, Sean Quigley who has handled the boys for the past six seasons and now will be at the helm for both programs.

FALL SPORTS
The Fall 2022 season begins in just over six weeks with Girls Volleyball and Football starting in early August. We will update the summer high school sports activity periodically this summer including water polo at the Junior Olympics in late July.

Looking for the latest Laguna scores, rosters, and schedules?
Go to the department website at lbhs.lbusd.org/athletics/teams for the updated schedules and where the scores get posted first for all levels! Have a Laguna Beach High School sports note? Email Frank at [email protected] 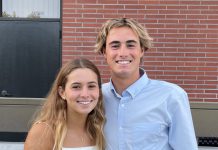