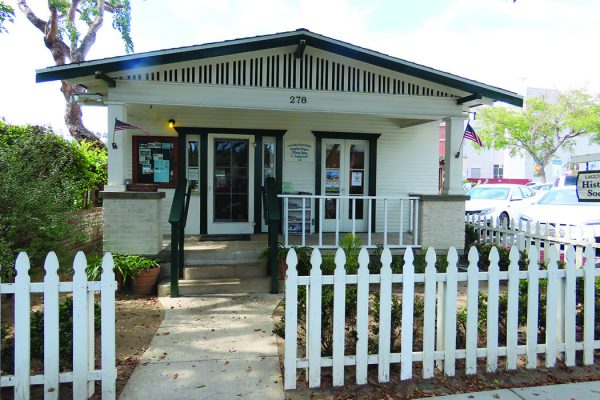 By Justine Amodeo | Special to the Laguna Beach Independent

Claiming that the City Council’s actions “were both short-sighted and unlawful,” the suit claims the CEQA protects the historic “built” environment to the same extent as the state’s natural resources such as air, water, and forests and that “as a matter of law, CEQA projects that substantially impact historic resources will have significant environmental impacts.”

The suit asks the court for an urgent  judgment “to set aside the city’s approval of the revised Historic Preservation Program pending CEQA compliance. An [Environmental Impact Report] process must precede program revision, consideration, approval, or implementation.”

The city’s new preservation program implements “owner consent” as a requirement for a property to be considered a local historic resource. According to Krista Nicholds, President of Preserve Orange County, “It would be unthinkable for the City to require owner consent to review biological habitat or wetlands during the approval process. State law recognizes that historic resources have comparable public benefit. Owner consent has nothing to do with objective standards of historic merit.”

While a group of homeowners, real estate agents, and property rights advocates said the City Council ended an unfair practice that limited people’s ability to remodel privately-owned property, long-time residents and history lovers argued that Laguna Beach’s unique architectural patchwork should be handed down to future generations and that a voluntary preservation program would prevent this.

The July and August votes were considered a victory for now mayor pro tem Sue Kempf and Councilman Peter Blake, who were elected in 2018 partly on promises to roll back historic preservation requirements.

In 1980 and 1981, the city-sponsored a Historic Resources Inventory that identified 852 pre-1940 homes and commercial buildings in Laguna Beach as having historically significant architecture. Separately, the city maintained a Historic Register of properties named by the Heritage Committee as historically or architecturally valuable. In return for signing an agreement to maintain their property in its historical condition, property owners get incentives such as exemptions from parking and property line setback requirements.

The changes to the preservation program mean that the City cannot, in the future, find properties to be locally significant, no matter how worthy, if the owner objects. They also remove existing protections for the hundreds of city-identified historic resources in the 1981 Inventory of Historic Resources, prepared in compliance with the procedures of the State Office of Historic Preservation.

“If the benefits were so great and so obvious we wouldn’t need any compulsion—in other words, we wouldn’t be holding people this inventory,” Kempf said in August. “You see all these long-time Laguna residents who are upset with being stuck on this inventory and their just trying to fix up their houses. And frankly, they can’t afford it.”

Others argued that easily changing or completely demolishing too much of what makes Laguna unique—particularly its architecturally diverse lineup of charming homes and businesses—will change the city’s historic character and nature.

But Mayor Bob Whalen disagreed with that assessment. “I don’t think this is going to result in a fundamental change to the physical nature to our community,” Whalen said in July. “300 properties have gone onto the historic register for 30 plus years now. 500 have sat on this inventory and not gone but also many of them continue to exist. So I don’t think this is going to be an opening of the floodgates to a redesign of the city.”

According to Laguna Beach Historic Preservation Coalition member Cathy Jurca, “these properties, which are essential to the remarkable charm of Laguna, are now at risk of substantial alteration or demolition without any environmental review. Some owners of Inventory properties spoke at public hearings about wanting to demolish or radically alter them. The City’s position that removing environmental protections could not impact these historic resources defies common sense.“

Residents and historic preservation experts stated in public hearings that the City’s process for changing the historic preservation program was flawed. Removing current protections for hundreds of properties by fiat requires a public environmental impact report process to consider feasible alternatives and mitigation.

That is the basis of the newly-filed suit. “We simply ask the Court to enforce clear requirements of CEQA that protect historic resources,” said Jurca.