The boys team finished third behind Cathedral (Los Angeles) and champion Foothill Technology, the charter high school for Ventura with a team time of 1:19.57 for the Division 4 race. Cross Country along with track are the only sports that compete in enrollment-based divisions. Division 4 is for schools with enrollments between 601 and 1529.

Mateo Bianchi finished second overall for the Division 4 race with a time of 15:03.3 to earn first team All-CIF honors. Logan Brooks was 15th with a 15:40.1 to also earn a medal with Tanner Burton, Chris Drews, and Gabe Neff, who also scored for the squad. It was the eighth time Laguna has finished in the top three at the meet.

On the girls side, Morgan Falkowski was fifth (18:07.9) and Jessie Rose eighth (18:11.9) to lead Laguna to a second place finish, their best placement since 2004. Orange Lutheran won the team title well ahead of the Breakers. Also scoring for Laguna’s team score were Nina Rogers, who earned All-CIF honors, Kaitlin Ryan, and Sydney Schaefgen.

This weekend, Nov. 30, Laguna travels to Fresno for the State finals at Woodward Park. Division 4 will feature 24 teams from eight of the 10 sections in California. Oakland and San Francisco do not have schools to compete in D4. Boys are defending D4 champions with titles in 1989, 2004, 2009 and last season. The girls are participating in their 14th State finals with their best finish a second place coming in 2013.

The individual tennis sectionals are Monday, Nov. 25, and the Sunset Wave Doubles Champions, Ella Pachl and Sarah McCallum, will be competing. Results will be in next week’s edition.

The 86th season for boys basketball opened with a 57-48 set back to Roosevelt (Eastvale) in a contest played last Saturday afternoon at St John Bosco’s gym. Breakers started out strong and held a 14-9 lead after one period but failed to make a shot until they converted a free throw with 3:25 remaining in the second period and never recovered from the drought. Nolan Naess had 18 points, Lucas Kravitz and Brooks Hogenauer each scored 10, and Willie Rounaghi added 8. Chase Hall scored 2 points. Will Potratz and Jackson Sirianni did not score. 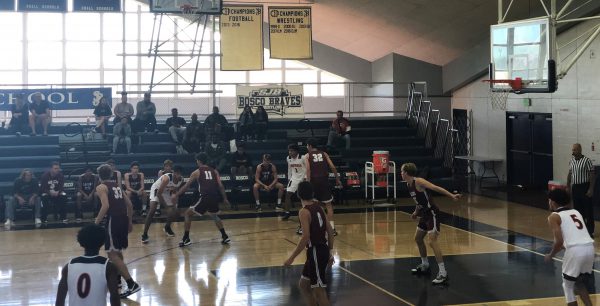 This past week Laguna faced Segerstrom at home on Tuesday and were at Dana Hills on Wednesday for the 45th all-time meeting with the Dolphins. Next week the Breakers will participate in the first of three consecutive tournaments with the Godinez tournament first on the agenda. Breakers will participate in the Gary Raya Tournament hosted by El Dorado and Irvine Dec. 9-16 and the Torrey Pines tournament after Christmas from Dec. 26-30. Bret Fleming is in his 25th season at Laguna with a 393-265 overall record.

Laguna went 2-1 since their opening win at Santa Rosa Academy. On Nov. 20, they dropped a 43-36 contest to Century at Dugger Gym as the Centurions built an early lead to control the game flow. Anna Cheng led the Breakers with 14 points, while Kenna Rudolph added 8 points, Clarice Curras 6, and Julia Henry also with 6 points. Rudolph had 19 rebounds. The following day, the Breakers defeated Orange 32-28 with Rudolph the top scorer with 14 points and 15 rebounds. On Saturday, Anna Cheng scored 19 as Laguna defeated St Monica’s 42-30 at the Marriner’s gym. Maddie Garwal returned to action with 14 rebounds. The team returns to the court next week with four non-league games hosting two—Santa Rosa Academy on Dec. 2 and Summit View West on Dec. 4. Individual and team statistics posted on Max Preps.

Andy Thomas returns as head coach this season for his second run at Laguna. Thomas coached from 1997 through 2004 capturing one league crown, two D4 CIF titles and one D5 CIF crown. He holds an 89-75-21 career mark with Laguna, the most wins among the squad’s 15 head coaches they have had in 44 seasons of varsity soccer at Laguna. The 2020 season opens Wednesday, Dec. 4, at 6:15 p.m. at Guyer Field versus Dana Hills.

Ben Helm is back for his third season at Laguna after a second-place Sunset Wave League finish last season. The squad opens play on Tuesday, Dec. 10, at 6 p.m. at Guyer Field, hosting Capo Valley.

The 23rd season of girl’s water polo opens on Tuesday, Dec. 3, at 4 p.m. when Laguna takes on San Clemente at Capistrano Valley’s pool. Ethan Damato (293-48) returns for his twelfth season with the Breakers, who have won four of the past six D-1 CIF titles and 13 straight league titles. Breakers are 176-9 the past six seasons and should be the clear pre-season #1 team in Southern California.

Girls Sand Volleyball will be getting a new coach as Steve McFadden has become the assistant sand coach at Florida International University after a three-year run as the Laguna head coach, where he compiled a 39-5 record for the Breakers. It appears popular beach pro Chase Frishman will be the new coach for Laguna pending school board approval. Frishman has been a top 10 pro-beach player the past few seasons and was the assistant coach to Laguna’s indoor and sand volleyball teams back in 2015. Locally he has played at Victoria Beach since junior high and is well known in the local volleyball community.