Nathan Lancaster started his senior campaign playing less than half the game but it was all he needed for a record evening. He led the Breakers to an easy thrashing of Bolsa Grande from the Garden.

Bolsa opened the game with a kickoff going out-of-bounds giving the Breakers only 65 yards to score.

Six plays later, Lancaster ran the final 40 for the first touchdown. The senior is also doing conversions going six for six. Brandon Sarhad recovered the subsequent kick off as Bolsa mishandled Lancaster’s kickoff. He needed only one play to score and it was 14-0 with less than four minutes gone in the contest.

Bolsa looked sharp completing a 46-yard pass play on their next possession but turned the ball over on downs on the Laguna 31 yard line.  Breakers went 69 yards in six plays scoring on a 14-yard pass by Jack Simon to Sean Hampton to make it 21-0.

Breakers next possession followed three Matador plays that netted three yards. The punt was returned to a net 17 yards by Lancaster after a penalty cut 10 off his return total. Andres DeLaRosa scampered 21 yards on a good run before Lancaster finished the drive with three carries and a 28-0 lead.

After a quick three play drive by Bolsa, Laguna had one last play in the quarter, a 48-yard run by Lancaster to make it 35-0.

Lancaster participated in one more drive in the evening before retiring with Laguna in control at 42-0 with over five minutes remaining in the half.

Laguna could have shredded their single game records but gave their limited bench left plenty of play time for the remaining game. Laguna now leads 7-3 in their series with the Garden Grove school.

Up next: Breakers played University this past Thursday, Sept. 12, at the new on-campus stadium at the Trojan campus. Last year the schools battled to a 36-36 tie, the highest scoring tie game in school history.  Breakers are only 3-21-1 lifetime with their hosts and a very tough contest is expected. University’s enrollment is more than double that of Laguna so they carry a large roster advantage.

How good is Lancaster? He averages 13.1 yards per carry over his career (128 rushes for 1,681 yards). If he holds this pace, he will shatter Drake Martinez’s 9.7 yards per carry career mark just set last year.

223 yards rush is 12th best in Laguna history, and is Nathan’s career best. 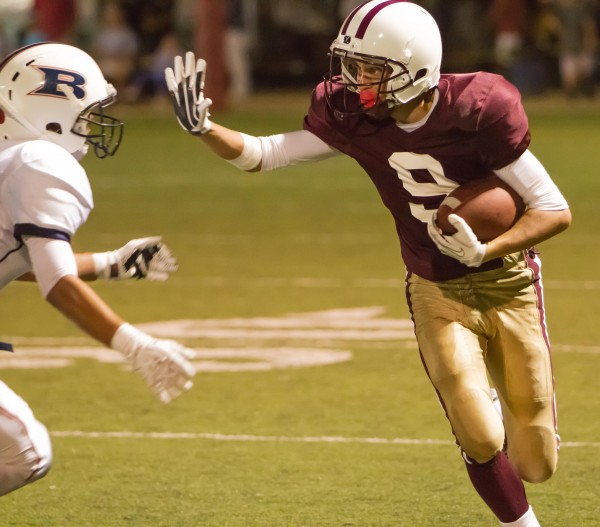