Piper died last week from a heart attack he suffered in the shop at 1796 S. Coast Highway, which he described in ads as “the last useful store in Laguna.”

“If you had a problem, Jerry was the go-to guy,” said 20-year customer Brad Charlton, who consulted with Piper when the transmission in his truck quit working. Piper advised a 16-ounce, $8 carburetor cleaner rather than replacing the transmission. “A 100,000 miles later, it’s still running. Every 5,000 miles I add Chemtool,” Charlton said.

At an informal shrine of mementos in the shop’s rear yard, friend Neil McQueen left a note describing Piper as possessing “a Ph.D in auto parts” and “an expert in everything, humble in all.” Cans of Piper’s beverage of choice, Miller beer, decorated a tree and kept company with lit candles and fishing gear. 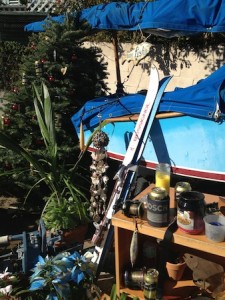 The shop hosted an annual fish fry begun by Piper’s friend and fishing partner Steve Battaglia, a local resident who frequented the store daily and shared his haul after deep-sea fishing. The event outgrew the store’s rear parking area and more recently was held at Bluebird Park early in the fall.

Though the shop’s fishing-gear decore “looked like an extension of his living room,” Charlton said, Piper proved an innovative merchant, refocusing the store’s merchandise to suit the needs of residents that loathe leaving town.

And loyal customers felt treated by a cold brew delivered by Piper’s trained hound, Holly, who knew how to open and close the refrigerator. “It is such a welcoming place,” Charlton said.

Piper owned the store with his wife, Jennifer. The couple lives in Mission Viejo. Their  daughter also worked at the store.