The Laguna Beach Planning Commission on Wednesday sent the developer of the proposed 118-room Museum Hotel back to the drawing board, saying the project should meet all requirements of the General Plan. 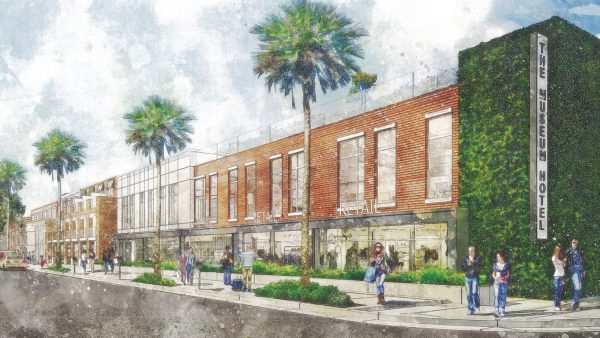 Planning Commissioner and hotel executive Steve Goldman delivered a stunning critique of Mo Honarkar’s current design for a four-star Michelin hotel as “a Hampton Inn hotel with a fancy restaurant.”

Goldman went on to say that the Museum Hotel’s current design misses a major opportunity to offer a unique experience that truly caters to an art-loving clientele. He argues that a planned 1,000-square-foot art gallery won’t accomplish this mission and recommended that Honarkar explore dedicating rooms to visiting artists who can produce artwork that would be displayed at the hotel and other Laguna Beach galleries.

Planning Commissioner Susan McLintock Whitin levied her professional experience as a landscape architect to criticize the project for its lack of open space and creative landscaping. She encouraged the development of a botanical garden incorporating art on the property that would be attractive to both upscale visitors and residents.

“I think what we should strive to be is the best art and architecture community of our size in the county,” she said.

Honarkar said he expects the Museum Hotel will be a landmark for Laguna Beach and attract visitors who will spend money at local restaurants, art galleries, and retailers.

“I don’t want to see any closed places in this town,” he said. “We’re here to design want you like. This is my gift to you, my family’s gift to you.”

However, neighboring property owners remain unconvinced that the cultural and tax-generating benefits of the block-long development will outweigh the negative impacts on views, on-street parking, air quality, traffic circulation, and parks and beaches.

Cypress Drive resident Brad Reed said his homeowners’ association is opposed to the Museum Hotel development because it pushes the limits of the allowed building envelope.

“The proposal would destroy a series of unique compatibly-designed buildings, some connected with important Laguna history, and replace it with one block-long structure that fills the building envelope,” Felder said.

The Royal Hawaiian is the original home of artist Anna Hills, a co-founder of the Laguna Beach Art Association, and led fundraising efforts to build its permanent gallery on Cliff Drive. Much of the building’s interior has been changed since her death in 1930, and the Laguna Beach Company plans to demolish the structure.

Monica Silva McCusker, KX 93.5 development director and member of Young Minds for Laguna’s Future, said she appreciates the time and expense the Laguna Beach Company has spent to bring forward a project, despite the complexities of building in Laguna Beach.

“Our group whole-heartedly trusts the final design will be compatible and beautiful,” she said. “The 300 block of North Coast Highway needs modernization. The hotel concept isn’t just for tourists, it’s also for residents who are craving these spaces and will utilize them and their functions.”

Planning Commission Chairman Ken Sadler recommended that the Laguna Beach Company bring back a revised plan for concept review, but admitted they’re free to move forward with a formal application.

“At this point, in my opinion, it’s got a significant amount of work that needs to be done to get to that approvable project we’re all trying to get to,” Sadler said.