This is a true story about arrogance. Specifically, mine.

It begins with kayaking. I go almost every day, venturing from one of the coves in north Laguna.  My usual route takes me north along the coast. I paddle to Emerald Bay and sometimes Irvine Cove.  From there, I race straight out a mile, rest huffing and puffing, then head back, but now paddling gently.

I can paddle leisurely back because the kayak is pushed south and towards the beach by the wind and waves. They are predictable. I have done it hundreds of times. The waves come from the north at about a 45-degree angle to the beach.  The wind also blows toward the beach, but at a lesser angle. I could ride back with my eyes closed just using the feel of the swells and wind. Or so I thought.

But as many times as I had paddled out, I never got close to a whale.   Everyone was talking about his or her own whale adventures and I had none.  Then on a Friday, I counted six simultaneous whale spouts from the beach. The following week, my son Harrison would be leaving for his first year at UC Santa Cruz and I was nostalgic in advance.  I proposed one more father-son bonding experience.  We would paddle out to the whales.

The next morning was foggy. By afternoon, it should have dissipated; instead, it turned patchy and dense. I did not care. I was a pro. We would go anyway. My girlfriend’s au pair, Kirsten, decided she wanted to go, too, so we set off in bathing suits, dark glasses and baseball caps.

Within a hundred yards, fog obscured the shore. It still did not matter. I knew the sea. I knew how the swells roll. I kn 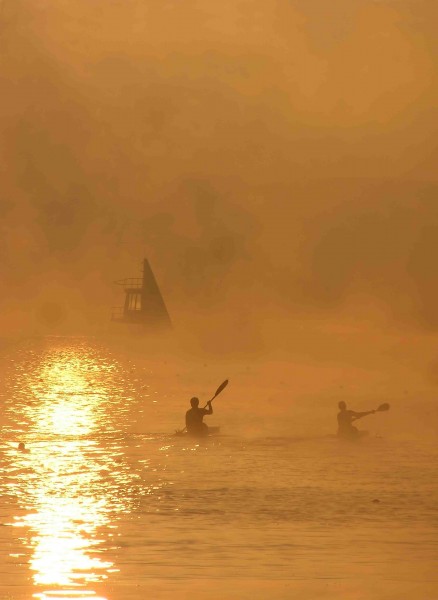 ew how the wind blows. We would paddle straight into the swells with the wind off my starboard bow. Seeing the shore was irrelevant. We would paddle an hour and arrive two miles off the Emerald Bay point. Then there would be whales. I was sure.

We left at 3:30. I know because the one extra item I brought was my waterproof Swatch watch. Occasionally Harrison or Kirsten became vague in the mist, but we were singing and laughing. At 4:30, we should have been there, but there were no whales and the sun was defused. We decided to paddle another 20 minutes. At 4:50 we stopped. Nothing. Dense fog.

As this was only Kirsten’s third ocean kayaking trip, I asked her if she was ok.  She said yes, except her hands were cramping. That was when I got a sense something was wrong. Cramping meant dehydration and we had no water.

We turned back and the fog was wet and cold.  Ten minutes later, Harrison asked if I could convert my watch into a compass.  No way. My uncovered legs were beginning to shiver, but we would follow the plan. Ride the wind and waves.

Soon after that, Harrison called a halt because he had to urinate.  To do so, he hung his legs over the side and was trying to get into a good position when the kayak flipped.  Splash. He righted the kayak, but it took three tries to scramble in. Now he was shivering. So was Kirsten. I looked at my watch. 5:10.

We kept going. I hurried us, pushing to go faster. About 5:30 the wind dropped off completely and because the sun was too hazy, I had only the direction of the swells to guide us.

Now it was 5:50. We were tired, wet and shivering, and thoughts of panic ran through me. I had been around the ocean my whole life and knew never, ever to be stupid around it. Never, ever take it for granted. Yet I paddled out in thick fog with no provisions and two young people who trusted me.

I was thinking sundown, no cell phone, no compass, no GPS device, no water, no wetsuits, hypothermia and no way to tie together the kayaks (which after dark, would be the only way not to drift from one another).  How could I possibly have believed the ocean was predictable?

Suddenly the fog lifted. Just like that. We were about 1.5 miles off Diver’s Cove. The waves had not been rolling toward the beach. They had shifted and were paralleling it.   We had been paddling with them and were lost. It was that simple. Arrogance.

Michael Ray grew up in Corona del Mar and now lives in Laguna Beach.  He makes a living as a real estate entrepreneur and is involved in many non-profits.