The new owner of The Ranch at Laguna Beach figures he’s spent $30,000 in the last year trimming 107 trees on the 84-acre property, including towering eucalyptus “widow makers,” as well as cutting down non-native pines.

“The haircut they haven’t had in 40 years,” explained co-owner Mark Christy, pulled aside a leafy curtain that obscured golfer’s views of limestone formations and the creek bisecting the nine-hole course. Pruning also made more visible the aging hotel buildings, stripped to their frames some months ago.

Last week, Christy received the go-ahead vote from Laguna Beach’s Planning Commission to move ahead with his broader vision to rejuvenate the property initially developed in the ‘40s, the former Aliso Creek Inn and Golf Course. Some hotel experts predict the renovation will transform it into a trophy, luxury golf property.

“We want to make it the coolest place in town,” Christy told the commission.

Now, more than a name change and landscaping will undergo change on what some have described as Laguna’s “Yosemite.” The hotel’s room count will rise to 97 rooms from 64, a spa and fitness center erected near the pool, a hotel lobby embedded in the restaurant, and banquet room enlarged and patio extended. 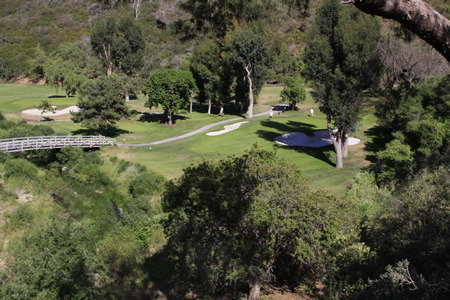 The new moniker evokes the Thurston ranch, one of the town’s homestead families who farmed melons and nuts in the canyon bottom in the 1890s. That lineage survives today in the town’s middle school, named after Marie Thurston, and descendant Council member Kelly Boyd.

Unfortunately, an amenity long-sought by the community will remain unbuilt in Aliso Canyon: a trail connection through the course to the adjoining county wilderness park.

A covered trail to protect passersby from golf balls would obstruct the greens for golfers and regulators would never permit its development next to a water course, Christy said. “There’s no way to bring it through. I wish there was,” he told commissioners, who granted Laguna Beach Golf and Bungalow LLC a conditional use permit on May 14. They also approved a valet service for events, allowing the property to operate with 215 parking spaces, a deficit of 80 required spaces.

“This is exactly what needed to happen; we didn’t need a huge teardown,” said Robert Zur Schmiede, the commission’s chair. Private investors deep-sixed an ambitious plan to remake the flood-prone property into a high-end conference center and spa fringed by tee-close homes during the recession in 2009.

Christy, a lifetime resident whose holdings include Hobie surf shops and La Sirena restaurants, bought the property last year with two other wealthy principals, who he has declined to identify. “I’m betting the farm,” he said. For his partners, Christy claimed the investment represents “shaking out their dry cleaning.”

The acquisition and renovation clearly are not pocket change, but neither will Christy spend $1 million a room, the price of upgrades to Santa Barbara’s El Encanto. Even so, Christy coveted El Encanto’s amenities and intends to replicate its whisper quiet air conditioners, salt-water pool and even “infinity” shower drains in rooms that look like missing grout lines.

Golf & Bungalow paid $19 million – a figure Christy disputed — for the property, Alan X. Reay, president of Irvine’s Atlas Hospitality Group, which specializes in hotel sales, said last July. “The price doesn’t make sense based on current rates,” he said, referring to the hotel’s $159 to $299 room rate, but reflects a bet by investors that they can either reuse the property by adding more rooms or renovating and raising rates.

The former Aliso Inn closed last November and is expected to reopen in September.

Christy takes pride in the transformation underway at the course’s far end. A former maintenance yard will soon summon

“Both of those histories were somewhat lost in the property until he made a very conscious decision and investment to bring them back for the benefit of the site’s character and the community’s connection with it,” said Derek Ostensen, president of the Laguna Canyon Foundation, who was consulted over removing invasive species throughout the property.

“We don’t want this to be a secret,” said Christy, who envisions holding weddings and public events at Scout Camp, as he’s renamed the site. A fire hydrant was added at the request of the fire chief, he said.

And giving visibility to the town’s history provides a lure to prospective visitors, who have many alternative choices in the area, pointed out Ranch consultant Vikram Sood, of San Diego’s NuPala Hospitality Group. “People are looking for a place with a story,” he said.

The project appealed to Sood, a veteran hotel manager, because of Christy’s “innate knowledge of Laguna” and his clear vision. “It’s a pleasure to be part of that journey,” he said, noting that the property will remain self-managed by general manager Kurt Bjorkman, marketing director Jim Tolbert and chef Camron Woods.

Ranch rooms, reconfigured to a still spacious 830 square feet but sans kitchens, will offer modern amenities, but conjure the beach vernacular where Christy spent his boyhood weekends. Like his grandmother’s cottage No. 9 in Crystal Cove State Park’s historic district, rooms will be sheathed in board and batten siding, masking wireless internet and sound-muffling construction. Drawing on her own memories, Christy’s sister Laurie Alter, who runs decor stores, will furnish the rooms with mid-century modern amenities, even including the vintage game Pick Up Sticks.

The redesign will allow The Ranch to cater to both tourists and corporate travelers, a segment that boycotted Aliso Inn because longtime former owner Violet Brown made few improvements. “Nothing was compliant,” said Christy, referring to access for the disabled.

Since buying out the principals who developed the nearby Montage resort last year, Christy has unfurled the welcome mat for the town’s non-profits, which struggle to find affordable, adequately sized venues for fundraising galas.