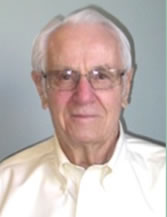 Longtime Laguna Beach and Aliso Viejo resident Richard “Dick” Lovejoy Narver passed away peacefully on May 27, 2012.  Born in Beverly Hills on May 14, 1923 to Alice Vida and David Lee Narver, he spent his childhood running through the bean fields behind his home and raising good-natured havoc with the local police. After serving in the Navy during WWII, Narver completed his studies at Stanford University where he was a water polo star and a Beta Theta Pi member.

He met and married his beloved wife, Grace Powell Narver while working as an insurance salesman in Portland, Ore.  In 1952, they moved to Southern California with their infant daughter, Lindy. While living in San Gabriel, their second daughter, Ellen, was born.  Over the years, they resided in San Gabriel, Altadena, Pasadena, and Three Arch Bay, before finally joining The Covington community in Aliso Viejo. Grace passed away in 2008 after 58 years of marriage.

Narver founded and owned the Richard L. Narver Company, which specialized in insuring architectural and engineering firms.  He was an active member of South Pasadena Rotary International and the San Gabriel Country Club, where he won The Craven’s Tournament, and was on the Camp Fire Girls board in the 1960s.

Narver’s personal interests included collecting contemporary art, gardening, golfing, crossword puzzles, and washing the cars on Saturday. In the 1960s and 1970s, the Narver family spent joyful summers at Victoria Beach in Laguna Beach. The couple enjoyed traveling all over the world; their first trip abroad was to Antarctica, followed by journeys to countries in Europe, Asia, South America, and the Far East, in addition to exploring the United States.

Memorials may be sent in Narver’s name to Lee and Vida Narver Civil Engineering Scholarship, Gift Processing, Stanford University,  P.O. Box 20466, Stanford, CA 94309.  There will be no memorial service or reception.