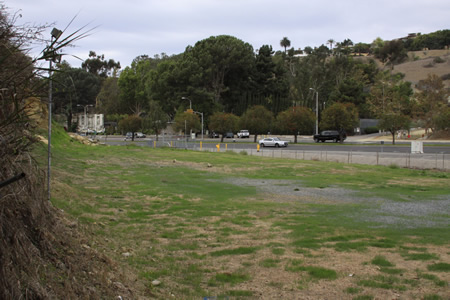 Laguna Beach’s City Council reversed course Tuesday, conceding a willingness to abandon a controversial proposal to build a four-story parking garage next to City Hall and remove the largest sticking point over the long-debated plan to beautify the town’s canyon gateway.

The concession comes in the wake of an unexpected land deal adjacent to the proposed village entrance site even as residents and city officials alike prepare for a public workshop to iron out differences on the project scheduled for 6 p.m. on Tuesday, Nov. 12 at City Hall.

“As far as the village entrance workshop, my position is that we are starting at ground zero when we get together next week,” said Council member Steve Dicterow, who defined that to mean everything is open for discussion and no decisions have been made.

In order to create a pedestrian park at the corner of Forest Avenue and Broadway Street, a parking structure was deemed necessary to replace surface parking from the existing city lot in order to comply with a Coastal Commission policy, whose rigidity some residents now contest.

Council members now reason that the recently announced land purchase bordering Laguna Canyon Road could serve to replace parking spaces without building a structure if the project is scaled back, which council members now claim they are willing to do.

The Council voted 4-1 to move ahead with the $5.3 million purchase of the undeveloped 3.8-acre parcel and in a similar subsequent 4-1 vote agreed to postpone an $85,000 soil test at the site.

Even so, tensions ran high Tuesday as 11 residents spoke their minds, at times flinging barbed accusations at city officials and receiving some in return.

Opponents to the project claimed the land purchase lacked transparency and was over-priced, even though some admitted it could benefit the city in the end.

Audrey Prosser decried what she termed the “veil of secrecy” surrounding the purchase of the property, indicating she had yet to receive requested documents related to the deal.

Rita Conn, chair of Let Laguna Vote, which draws support from political liberals and conservatives, called on the council to postpone finalizing the land deal until after next week’s workshop as a “good faith” measure, and to rescind its original vote approving the project.

In June, the Council agreed to finance a proposed $42 million park and four-story parking structure, using $13 million from city coffers and floating a 25-year $29 million revenue bond to cover the rest.

“Until we have a rescission, we have to keep going,” added Conn, who said attorneys advised the group   not to rely on the Council members’ professed willingness to abandon the structure. Let Laguna Vote last month registered as a campaign committee with Laguna’s city clerk.

Alan Boinus professed to be “flabbergasted” by the $5.3 million price for what “is a Christmas tree lot, after all,” referring to its annual transformation. He and others questioned why the city didn’t act when the property was apparently sold in foreclosure for $548,000 in 2011. “The city is playing fast and loose with our money,” he said.

“I’m flabbergasted that the opponents to this project would oppose this property that might end in our reducing the parking structure,” countered Council member Bob Whalen, who agreed with Council member Steve Dicterow that buying the undeveloped triangle protectively keeps it from future development.

“We think the purchase price is reasonable,” said Ben Siegel, director of community services, who cited appraisals in 2009 an 2011 for $8.2 million and $2.4 million, respectively.

Prosser says city staff has yet to disclose documents that fully corroborate that information.

Siegel said the property could accommodate at least 65 parking spaces and estimated necessary improvements at about $1 million.

Cary Glenn, the local realtor engaged by City Manager John Pietig to handle the city’s purchase of the property, said that the $548,000 foreclosure price cited by opponents was just the last of six liens that the purchaser had to pay before getting title to the property, in addition to paying off a $1.2 million lawsuit, and that the actual price at that time was somewhere between $3 and $4 million.

Glenn admitted that land is very difficult to comp in Laguna Beach, but said that the per-acre costs of lots listed with the multiple listing service since January ranged from $2 and $5 million per acre. He called the city’s purchase, at $1.4 million per acre, a competitive price by those standards.

Mayor Kelly Boyd noted that if the land is purchased using some of the $13.3 million set aside for the village entrance project and the remainder spent on parking lot improvements and a park, all without building a parking structure or issuing debt, “maybe that would satisfy the total community, not just a certain element of the community, but all of the community.”

Mayor Pro Tem Elizabeth Pearson said that concept was the basis for the presentation she and Whalen would be making at the workshop next week.

But when it came to a vote on the land deal, Iseman dissented, citing a lack of “surety” that the parking structure was definitely off the table.

Iseman also asked fellow council members to reconsider an earlier vote for $85,000 in soil testing at the site, approved to address concerns raised by residents about potential contamination. If the parking garage is stripped from the concept, which avoids excavating, Iseman suggested foregoing soil testing and potentially expensive remediation.

“Given the concerns of the community,” City Manager John Pietig said some sort of testing should still be done, but proposed less extensive testing at half the cost.

“It seems to me we’re going to be disturbing the soil in some way,” agreed Council member Bob Whalen. “I think it’s irresponsible for us not to complete the investigation of the soil and find out what’s there. To raise this as an issue and then stick our head in the sand is totally irresponsible.”

Boyd drew the ire of entrance opponents by suggesting their concerns about soil testing were less about potential environmental contamination then as a means to block the proposed parking garage.

Enraged, Prosser defended opponents for raising environmental concerns and criticized the elected officials for their lack of respect for constituents. “You don’t listen to us here, you actually insult us, I don’t appreciate it,” she said.

While others seemingly remained combative, Arnold Hano alone remarked on the so far unacknowledged “victory.” “It sounds as though the garage ain’t gonna to be built. I’m tip-toeing around that…but I think that’s what I’m hearing,” he said.

Dicterow said he saw no point in soil testing now before knowing the extent of the project. Iseman, Pearson and Boyd agreed, though Boyd said that didn’t preclude testing in the future. Whalen dissented.

While the coming workshop’s outcome is still unclear, “what I do know is that there is something possible now that was not possible before,” Dicterow said.