When Bridgette Shaw received a phone solicitation from the Orange County chapter of the Susan B. Komen organization she wanted to help, but was low on cash. It didn’t take her long to realize she could make a difference with resources she had at hand.

Shaw, who had ties to the Laguna Gallery of Contemporary Art, recently took over ownership, hanging up her real estate license to devote herself to the gallery full-time.

Fellow artist and friend Robin Hiers and Shaw came up with the idea of combining the gallery’s grand opening with promotion of breast cancer awareness month in October. Painted bras figure in the picture.

During her real estate years, Shaw found herself selling art to the same clients she’d sold homes to. “It goes hand in hand,” she said. “You buy a beautiful house and you want beautiful art to put in it.”

Born in Philadelphia, Shaw moved to Laguna Beach at age 10 and attended El Morro Elementary and Thurston Middle School. Shortly after graduating from Laguna Beach High School in the mid 80s, Shaw was selling her own hand-painted leather earrings at the Sawdust Festival.

After earning a bachelor’s degree in liberal arts from Antioch University in Seattle, Shaw spent some time teaching English as a second language while home-schooling daughter Isabell. Another move took her to Paris, where she spent a year teaching English language classes.

Initially, she thought she’d stay in France “forever,” but “I soon realized I wanted for Isabell what I had had growing up.” So she returned to Laguna Beach and enrolled her daughter at Thurston.

The Laguna Gallery of Contemporary Art, under Shaw’s direction, will feature the work of gallery regulars Vladimir Prodanovich, Becky Black, Maxwell Carraher and Joseph Moscoso along with others and new artists Kym De Los Reyes, Carole Sluski, Greg Stogner and Robin Hiers.  “I have a family of artists,” Shaw said, noting that she wants the gallery to be accessible to all, “even kids with ice cream cones.”

Shaw’s experience representing artists includes an upcoming show, which will take place in January at the Ritz Carlton, Laguna Niguel. Her show there show last year sold out, she said. Two years ago she represented five artists, known as the California Locos, at Art Basel, a one-week show in Miami. 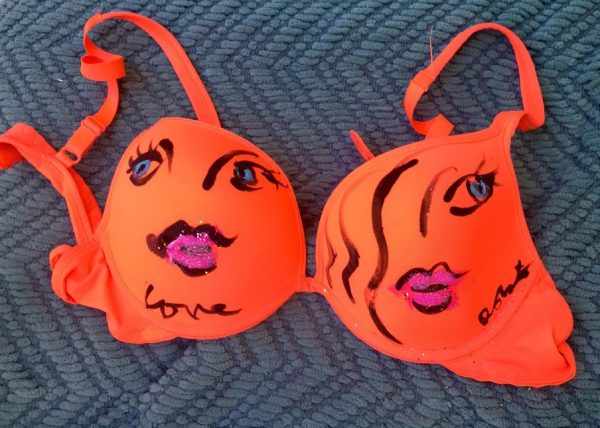 Starting at 2 p.m. during Art Walk on Thursday, Oct. 6, Hiers will be in the gallery at 611 S. Coast Highway, painting on donated bras. Guests can bring their own bras as well. “The Painted Bra Art Project” is an established breast cancer awareness project, she said.

After increasing for more than 20 years, breast cancer incidence rates in women began decreasing in 2000 and have since stabilized, except for a slight increase among African American women, according to the American Cancer Society.

A volunteer from the Susan G. Komen Foundation will be at the gallery to answer the public’s questions. Visitors can purchase raffle tickets for three prints and an original work by Hiers with proceeds benefiting the foundation.

The bra painting “honors sisters, friends and survivors,” said Shaw, who has a friend that suffered cancer, adding, “the bras signify that survivors are still women who want to be cute, sexy and fun.”