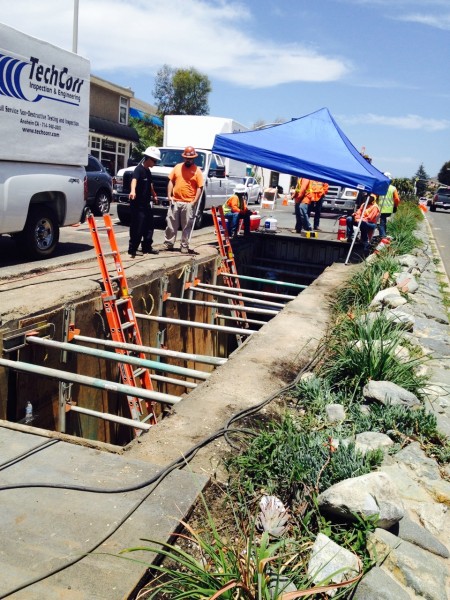 Merchants in South Laguna and southbound commuters both are suffering from the consequences of emergency pipeline repairs in Coast Highway that are expected to last another week.

To lessen weekday afternoon congestion that has generated a two-mile long back up to Nyes Place, traffic control officers will now be on the scene daily waving cars through the Third Avenue signal, said Jim Beres, who supervises the police department’s traffic officers.

Rerouting cars around the blockage into the narrow lanes of inland neighborhoods will do little to lessen congestion, Beres said. “Unfortunately, there is no good solution,” he said.

Since last Friday, May 30, multiple gas company trucks have occupied the inside southbound lane of Coast Highway between Third Avenue and Eagle Rock Way. On Wednesday, showers of sparks were visible around welders wearing protective hoods working on a 16-inch gas line in a below ground opening roughly eight feet deep and 30 feet long.

Gas company officials did not describe the exact nature of the emergency. Anomalies detected by an in-line inspection required repairs, which have been completed, spokeswoman Anne Silva said Wednesday. “This is routine maintenance SoCalGas performs to keep our system safe.”

Workers were on the job until 8 p.m. on Wednesday, “to safely secure the high pressure gas line during a critical portion of the repair,” said a statement by City Manager John Pietig, who described the repairs as federally mandated emergency work.

As a measure of the repair’s significance, though, just three conditions required immediate repairs among 1,688 anomalies detected in pipelines by SoCalGas in 2011, according to the most recent transmission report filed with the state Public Utilities Commission. In that year, the utility used in-line inspection tools to examine 383 miles of pipeline in its service area.

Business in the South Laguna Village is about as slow as the cars crawling past, South Swell Donut shop owner Jackie Nam said this week. Regular customers are having difficulty finding a place to stop, Nam said. “But what can you do? They have to fix it,” she said.

No Longer Waiting in the Wings, No Square Hires New Directors