The Laguna Beach Planning Commission voted unanimously against a proposed $10 million renovation of the historic Coast Inn and the adjacent Coast Liquor store after a lengthy public hearing Wednesday, Oct. 4, where testimony weighed against the project by three to one.

In an interview the following day, owner Chris Dornin expressed surprise and disappointment at the decision, which is only an advisory recommendation. The plan will receive a final hearing before the City Council at an undetermined later date because the ‘30s era hotel is considered an “E” rated historic structure.

In the meantime, Dornin said he applied this week for a city business license to reopen the legendary Boom Boom Room nightclub with live entertainment and drag shows and is seeking a permanent liquor license. “The reality is we can open the business tomorrow,” said Dornin, and operate without any of the 54 stipulations proposed for granting a conditional use permit for the makeover.

The regulations would close bars and restaurants before 2 a.m., restrict hours of trash pick-up, cap occupancy and forgive typically required parking under credits for historical preservation. Planner Martina Caron recommended approval of the project with conditions, which she said was consistent with other historical projects in town.

“We were willing to accept them,” Dornin said. “It’s 10 times worse to not approve the project.” Currently, Dornin said the fire department set occupancy at the 24-room hotel and nightclub at 597, while occupancy of the proposed renovation, with guests, a lobby bar, rooftop bar and deck and ocean-front restaurant, was capped at 329 seats.

Dornin contended that this week’s decision effectively nearly doubles the neighborhood impact compared to the proposed project. “If we’re not going to get the benefit, we’re better off the way it is. We’re going to open up as is.”

Nevertheless, Dornin isn’t ready to drop the makeover and will pursue a different outcome before the City Council. He is hopeful elected officials will give greater weight to the 2015 findings of the city Heritage Committee, which upgraded the Coast Inn’s historical rating, thus allowing for intensifying the land use.

Those findings received a skeptical rebuke from Planning Commission members this week.

“This is a mash-up, a cut and paste approach to historical preservation,” said commission chair Susan McLintock Whitin at the conclusion of two hours of public testimony.

“Today, there has not been a rigorous historical comparison as to what’s being preserved,” she said, pointing out contradictions in architectural details on the proposed Coast Inn plans compared to the Mediterranean Revival style on a 1935 postcard illustration of the hotel.

Whitin also criticized city policies that allow “grandfathered” parking exemptions as a trade off to developers for restoring historic structures. She called the practice a “misuse of the historic credit system.”

Commission member Ken Sadler raised a different question. Because of rooftop improvements that would require internal structural reinforcing throughout the building, Sadler could not see how the project can escape the status of a major remodel, which would trigger meeting new building-code construction standards.

“That in my opinion is the stake through the heart of this project,” said Sadler. “I don’t buy it.”

That point also troubled commission member Roger McErlane. He was equally troubled by the proposed rooftop bar, both because it lacked historical authenticity and due to conflicts with federal Secretary of the Interior historical preservation standards. 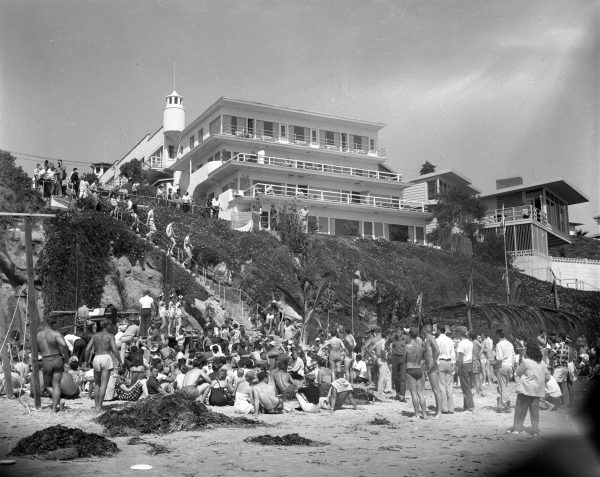 Commission member Anne Johnson said she regretted not pushing for an environmental impact report to assess the project when it was initially heard last December. By Johnson’s count, with the hearing testimony of 38 people and letters from another 45, the project set a new record for controversy.

Among the contrarians supporting the renovation was Mike Boone, a member of the city’s Heritage Committee, who spoke on his own behalf. He urged commission members to not lose sight of what historical preservation tradeoffs have already achieved. “It’s bordering on miraculous,” Boone said. “So many legacy buildings are still here. It’s because Laguna chose to preserve its DNA,” he said. “Help those trying to preserve historic projects,” he urged.

His opinion on preservation reflected the views of most commentators, who welcomed restoration of a long neglected structure. But renovation did not trump gripes, which ranged from a lack of facilities for the handicapped to a rooftop cupola that would violate the town’s height limits.

Prior to the hearing, Leah Sklar and Terry Meurer, two neighbors in close proximity to the hotel on one-way Gaviota Street, went further by independently hiring noise and traffic consultants and a lawyer. A report by traffic engineer Sandipan Bhattacharjee, a principal of Transolutions in Tustin, described the Coast Inn traffic analysis as having “unrealistic assumptions” and “errors” and relying on “incorrect methodologies.”

Time will tell if Dornin receives one more to his liking.