The Museum Hotel would redevelop the ocean side of North Coast Highway between Cliff Drive and Jasmine Street. Besides hotel rooms, the 30-foot-tall building would include 8,020 square feet of public museum space, 3,610 square feet of retail space, 5,170 square feet of “marketplace” space, a nearly 1,900-square-foot spa, a rooftop pool, and a third-story restaurant.

To make way for the new building, the developer would demolish the office building at 305 N. Coast Highway, the Royal Hawaiian restaurant, the former von Hemert Interiors furniture store at 345 North Coast Highway, and Laguna Nursery. The Museum Hotel will not be taller than the adjacent apartment building at 330 Cliff Drive.

According to the conceptual drawing, Laguna Beach Company is exploring an idea to tunnel under Cliff Drive to create a passageway that would connect the Museum Hotel with the Laguna Beach Art Museum. 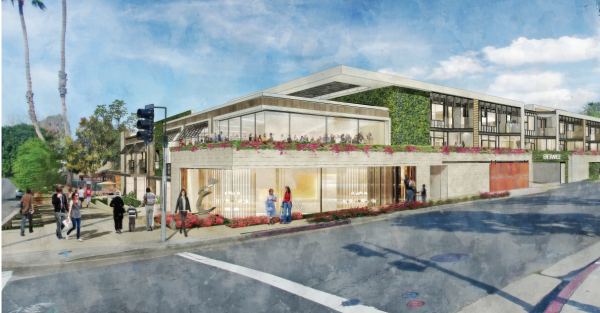 “The reduction to 80 guest rooms is achieved by providing more suites as opposed to singles,” Architect John Tilton wrote in a letter to city staff.

The project’s architects also redesigned the hotel’s facade on South Coast Highway to include awnings and a landscaped wall with the hope these changes address planning commissioners’ comments that the original design was too linear.

The Cleo Hotel plan still includes a third-story pool area with a bar and a second-story restaurant enclosed with large glass windows and a small outdoor seating area.

Johanna Felder—president of Village Laguna, a local organization whose mission is to preserve Laguna’s “village character,” said Thursday that she had not yet seen the new plans for either hotel.

The Planning Commission expects to hear a presentation from city staffers as early as Aug. 7 about the status of all Laguna Beach Company projects and when they might come to the commissioners for concept review.

The public can view the plans at www.lagunabeachcity.net/cityhall/cd/planning/major_development_projects.htm