“Don’t it always seem to go

They paved paradise and put up new sidewalks”

–with apologies to Joni Mitchell 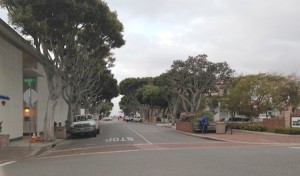 There is one thing for certain. Everything eventually comes to an end.  That certainty is particularly disquieting for me as the City Council has elected to value sidewalks over six Indian laurel trees (Ficus microcarpa var. nitida), which were planted around the time I was born.

In terms of lifespan, while I may have missed the opportunity of ever achieving maturity, the trees are still in their prime and beautiful (remembering that beauty, of course, is in the eye of the beholder).

Yes, I know that ficus trees are notorious for cracked sidewalks, fruit litter, compromised sewer lines, and maybe lawsuits, all of which can be remedied. I don’t believe those concerns out value decades of dependable, leafy canopies, shade, air filtration, and mitigation of building mass.

Both city staff and council members mentioned the landscape and scenic highways resource document at the recent meeting.  The document makes several landscape suggestions, including:

“Leave existing large Ficus nitida trees intact on Ocean Avenue, but do not plant new ones.  Although these trees have some problems with roots and sidewalk litter, they create an attractive canopy and welcome pedestrian scale to the street.  Removal of these trees at this time would have a negative impact to the character of the Downtown…”

Local nurseryman Ruben Flores got it right at the City Council meeting, by explaining that enhanced maintenance techniques and root barriers could solve many of the root and foliage issues, which originated from poor street tree planning and maintenance, decades ago.  Some cities have even installed rubberized sidewalks that won’t crack as tree roots grow. Why can’t we?

The Indian laurels have long sheltered residents and visitors alike from a hot summer sun.  But when they are cut down, will the city replant with trees of similar size and character?

Or, in their stead, will the city only be able to afford young saplings, with twig-like trunks and an immature canopy, which may barely cast a shadow?  If so, if you’re in your 30s now, you can expect to enjoy shady Laguna streets again, when you’re eligible for Social Security (if it still exists).

The Indy posed the question last week, “What gives Laguna its character?”  I agree with Planning Commissioner Norm Grossman’s assessment, “We’re talking about appearance and feeling.”  And much of that revolves around our eclectic downtown, with its shady, tree lined streets. I hope we won’t have to pay a dollar and a half just to see a ficus in the Laguna Tree Museum.  See you next time.