By Kellie Hall, Special to the Independent

A charred scrap of The Tell, the 636-foot-long photomural assembled in Laguna Canyon in 1989, looks like an excavated piece of earth, with jagged, discolored edges and flaps of completely faded photos peeling off its surface. This remaining section the installation created by Mark Chamberlain and the late Jerry Burchfield is one of the few Tell remnants, saved from the 1993 fire that burned most of the artwork as well as hundreds of homes in Laguna Beach. It remains in Chamberlain’s BC Space gallery in Laguna.

The artwork became a gathering point for an 11,000-person march that is credited by many with defeating plans by the Orange County developer, the Irvine Company, to build a planned community in Laguna Canyon 25 years ago, Chamberlain recounted in a Laguna Beach Historical Society talk last month.

“It was an albatross,” said Chamberlain. Tell sections were stored in various places but had to be moved frequently. At one point, Chamberlain received a call from the man storing the artwork at his home, which was under construction. Day laborers had confused the framing of the house with The Tell. They built a part of The Tell into the house, Chamberlain recalled.

After the fire destroyed portions of The Tell, its co-creator honestly felt a sense of relief at no longer having to constantly move the massive artwork, Chamberlain said in an interview last week.

Even so, the Tell’s creators initially hoped to preserve the work, envisioning it as a museum-worthy exhibition. With a future installation in mind, The Tell was coded and organized after it was dissembled and removed from the canyon. Once seen indoors, visitor could have witnessed the enormity of the project, said Chamberlain.

Despite the project’s notoriety, including a mention in a 1989 edition of Time magazine, Chamberlain and Burchfield failed to find a museum or art institution that would be willing to accept the artwork.  The long “tentacles” of alliances between the Irvine Company, Irvine family members and art institutions in Orange County prevented The Tell from finding a more permanent home, according to Chamberlain. But even then, Chamberlain recognized the physical constraints of museum space, regardless of any political issues.

Paul Schimmel, who was chief curator at the time of the Newport Harbor Art Museum, located in the Irvine Company-owned Fashion Island, told the artists rather frankly that Donald Bren, the Irvine Company’s chairman, would have his head if the museum took in The Tell, recounted Chamberlain.

The artists also approached Charles Desmarais, former director of the Laguna Art Museum, but he vacillated about involving the museum, said Chamberlain. Even the pro bono advisor for the Orange County Center for Contemporary Arts worked for the Irvine Company, according to Chamberlain.

Considering the massive scale of the artwork, it would have been difficult to preserve outside of a very large institution, such as the Smithsonian or the Getty Museum, said Grace Kook Anderson, contemporary art curator of the Laguna Art Museum.

Anderson was also unsure of what the museum’s response was to the Tell as it predates her tenure there. The spirit of artworks such as The Tell is not always intended to reside “within the white walls of a museum,” Anderson speculated, and cited similar large-scale installations.

The landscape installations of Christo and Jeanne-Claude, including “The Gates,” 7,503 vinyl gates erected on pathways in Central Park in February 2005 and “Running Fence,” a veiled, 24-mile-long fence on display in North California in September 1976, are intentionally temporary and are intended only for the viewer to have a fleeting, purely aesthetic experience. Their installations leave almost no impression on the landscape after being disassembled.

Though years in the making, the timing and location of The Tell made the project into an effective organizational tool that went on to defeat a powerful developer. The march through the canyon took place on Nov. 11 and a final vote of approval for the project was scheduled to take place on the following Tuesday.

Though the photomural included deep symbolism, The Tell is primarily remembered for its catalytic power to incite protest and communal values. The Tell was fueled by “people power,” as Chamberlain referred to his helpers. The creators launched a campaign for people to send in photos that captured their memories of Laguna Beach, which were pieced together in the mural by volunteers.

It turned out that art intended to protect the wilderness with paper-preserved memories could not secure protection itself. But perhaps that makes the memory of The Tell all the more compelling. The Tell became a powerful experience and collective performance, rather than a document.

Residents who walked or sent photos resisted the forces “profiting at our collective loss,” said Chamberlain. Long-time resident Jim Hind, who attended the talk, had his own summation: The shared experience forged a bond of community within Laguna Beach still in evidence today. 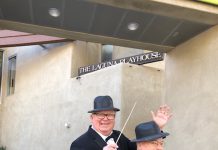 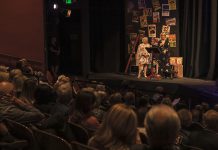