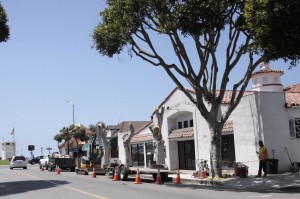 Surprised and alarmed by the removal of 10 large trees last week in the downtown area, residents expressed their anguish at Tuesday’s City Council meeting.

“Please stop the chainsaw massacre of the ficus trees in the downtown area,” said Pamela Goldstein, blunt in her entreaty. Ocean Avenue’s aesthetic appeal will take 50 years to recover, she said.

Seven of the trees in question had been deemed hazardous and slated for replacement as part of a routine sidewalk repair project, while three others fell under the ax as a result of a plan to renovate 222 Ocean Ave. into a restaurant. 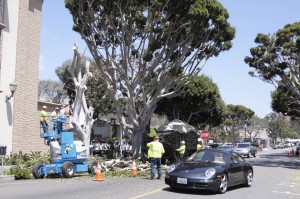 sidewalk safety remedies and to give more public notice before removing any more.

“I never realized how emotionally attached I am to the green canopy,” said Barbara MacGillivray. Uneven sidewalks fail to outweigh the “irreplaceable landscape value” of the trees, she said, pointing out the felled ficus trees were planted in 1955, prior to Eucalyptus becoming the city’s official city tree in 1967.

“Can’t we talk about preserving this arboreal heritage?” she implored, earning applause for her subsequent suggestion that black banners be wrapped around trees doomed in the future to give residents a chance to intervene.

Ruben Flores, owner of Laguna Nursery, said that even though ficus trees were not his favorite, “they are here, and they are huge, and they give a beautiful mass of foliage.” He also raised a question about the city’s intention of replacing landscaping before summer, not the optimal planting season, he said.

“My parents actually moved here because of the trees,” attested Greg MacGillivray, who believes that people prefer Laguna over nearby coastal cities because of its visual beauty, owed in part to trees.

“These trees matter to me very much,” said Hallie Jones, a Laguna native now raising her own children here. “It pains me to see them go.”

Only Eleanor Henry defended the city’s action, describing her exasperation over routing wastewater lines every three months because of a root-invading ficus tree on her friend’s property.

In response to skepticism over safety issues, Mayor Kelly Boyd noted that the city has paid $300,000 in the past five years in settlements involving trip and fall claims.

Though city staff determined that the replacement of eight trees deemed hazardous did not require a design review hearing, council member Toni Iseman requested the project to be considered by the full council on April 9. At the time, Flores pointed out a rare eucalyptus specimen among those to be cut, which was spared.

The council voted to remove three other trees at 222 Ocean Ave. on April 23 when they approved permits for the property’s renovation.

All of the trees are to be replaced, though the species has yet to be selected.

On the subject of notification, City Manager John Pietig noted that the tree removals did come before the council, but Iseman pushed for better notification. While she intervened to place the sidewalk tree removal  project before the council, tree cutting at 222 Ocean Ave. moved ahead with little public notice. “People had no idea that approval of the historic building would result in the removal of three trees,” she said.