By Joe Cockrell, Special to the Independent

I love dogs. I’ve had a canine companion for most of my adult life, including an Australian Shepard named Libby that I rescued five years ago. In 2012, I was recruited to move to Southern California from my native Iowa for a position in higher education. With such a big move, I thought it might be best for Libby to wait until I got settled into my new life in Orange County. After I was established with my new job and moved into a pet-approved apartment in Laguna Beach, I was ready to bring Libby out to join me in our new home. But, in an unexpected turn of events, my mother was diagnosed with breast cancer and Libby would become a vital distraction for her during the first few weeks of chemotherapy. My father had little doubt that the affectionate dog was making a huge difference in their lives, and suggested that they adopt Libby and keep her there permanently. “Libby is her rock. It’s amazing how that dog helps her through it,” he told me. Libby had a new purpose in life.

Not long after, I saw the cutest video on a local newscast: a small dog who could ride a doggie scooter, made from an old skateboard. The adorable video clip made me instantly smile, but the pup was not on the news because of her unique talent. Somebody had abandoned the six-year-old Chihuahua mix in Los Angeles and she needed a new home. Scooter included.

I connected with Isha Willits at the Baldwin Park Animal Care Center, who suggested I come up and see Chiquita the Chihuahua in person. The news coverage from Chiquita’s unique talent generated a lot of interest and attention from dozens of people, but as Willits would tell me, they were looking for somebody special to take her in. Chiquita had a flea infestation so bad it had caused a serious skin infection, broken teeth and an unexplained wound on her head. In addition to all of these treatable issues, she would also need to be spayed. The poor little thing had been through a lot and she was extremely bashful, so Willits wanted her to go to a new home that would nurse her back to health and re-socialize her. For me, it was love at first sight.

I am happy to report that she is doing very well thanks to her new veterinarian and lots of love. All of her ailments have healed well, and she has become comfortable in her new Laguna Beach home with me. She has scooted her way into my heart and brings me joy every single day. 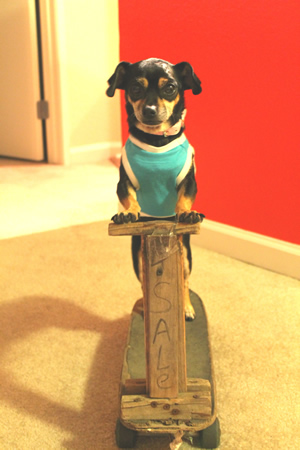 To the delight of my neighbors, Chiquita still loves to ride her scooter. It turns out there is a medical reason behind her adorable skill. I learned from her new vet, Dr. Nawar at Banfield Pet Hospital on Aliso Creek Road, that she has a birth defect known as subluxation of the patella, which effects the cartilage in her back knees and hips. She can walk just fine, but she can’t go for long walks because the friction eventually becomes painful. However, she can ride her scooter for as long as she wants, which could have been a reason she learned to ride a skateboard. Regardless, her daily scooter rides allow us to be out-and-about in the neighborhood, which is in turn helping her become a happy, well-socialized dog.

As you can imagine, Chiquita turns a lot of heads on her daily scoots, and everyday people snap photos of her. I really want to use the attention she gets to promote animal adoption. We’ve all seen the TV ads showing abused and neglected animals, but I’d rather focus on the joy and love that rescued pets bring into their new homes.

According to the Humane Society, an estimated 2.7 million healthy shelter pets are not adopted in the U.S. each year, and only about 30 percent of pets in homes come from shelters or rescues.

I just registered Chiquita for our first fundraising event, the Best Friends Animal Society’s fourth annual Strut Your Mutt in Los Angeles on Sept. 15. He story is going to be featured in a video.

Chiquita makes me smile every single day. Now that I’ve nursed her back to good health, I would like to somehow get her some new wheels, especially for making public appearances at fundraising events. Her scooter was made from a small skateboard. It is falling apart and hard to steer. If you have suggestions, or would like to follow Chiquita in her new Laguna Beach life, I’ve set up a Facebook page for her at www.facebook.com/scootpooch.

Joe Cockrell is a former journalist now doing public and media relations in higher education. He lives in Laguna Beach.