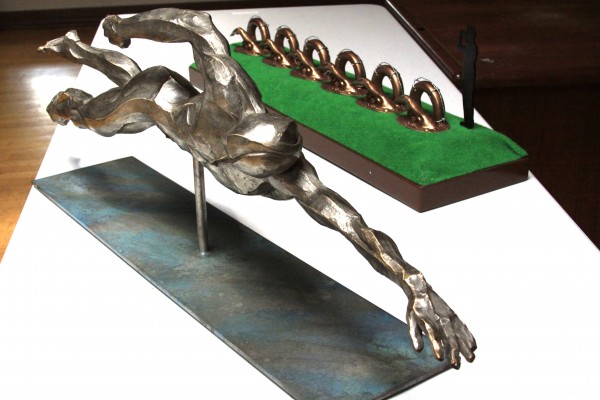 Both finalists in a $60,000 sculpture commission to embellish Laguna Beach’s lifeguard headquarters came away empty-handed when the city’s Art Commission unanimously rejected their proposals at a meeting Monday, Sept. 9.

It was the second setback for the competition, which was subject to a second round of submissions after commissioners postponed the initial selection in April. At the time, site specifications lacked enough clarity, commissioners concluded.

Sculptors Gail Folwell of Boulder, Colo., and Stephen Fairfield of St. David, Ariz., presented what they individually hoped to be the winning project, specified as a 25-foot, low-profile sculpture that would avoid hindering sightlines from the building.

Both artists visited the site now under construction on Main Beach in July to get the lay of the land, since their proposals were required to meet city specifications regarding design, material durability and public safety but also to fit aesthetically into the site’s topography.

At the time, they were briefed on site by city arts manager Sian Poeschl and members of the commission’s sculpture sub-committee. Veterans of public arts competitions said the arts committee’s instruction had been clear. After being selected as finalists, each confidently returned to Laguna Beach on Monday for a final presentation and the expectation someone would win the brass ring. 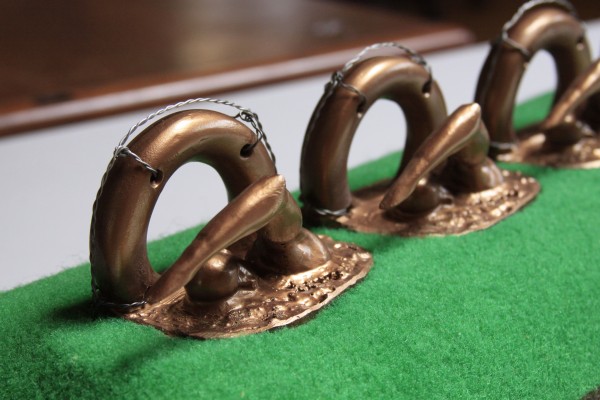 During the presentation, however, commissioners learned Folwell’s “Swimmer,” a somewhat abstracted bronze rendition of a nine-foot long swimmer, is one of a cast bronze edition of nine identical figures, with three already installed elsewhere in the country. Such multiplicity violates Laguna Beach’s rules governing originality. Commissioned public art has to be designed and executed (with allowances made for manufacturing like foundry work) by the artist and be one of a kind.

“In museum definition, anything cast in edition of nine is considered original while everything over nine a reproduction,” explained Folwell. However, the commission countered that the piece had been submitted as one already in existence and not created specifically for and in accordance with the Laguna Beach site.

Folwell, a graphic designer and illustrator specializing in action sports themes, had hoped that the swimmer’s base, following the wave pattern of the site’s berm with a maximum elevation at seven inches and the lowest at ground level, would satisfy the site-interaction requirement. The swimmer was to be covered by a green-turquoise patina presaging the way bronze ages in a salt-water environment.

Initial requirements for the sculpture competition also stated that it be no taller than three feet and no longer than 25 and presented in segments to allow visibility from the building. The “Swimmer” is one solid piece.

Then there was the issue of money. Folwell explained that her first “Swimmer,” now at home at Ohio’s Bowling Green University sold for $90,000. By offering an edition, she could defray costs at Laguna’s price, she said. Her resumé shows that fees for her public arts works range from $80,000 to $500,000.

Arts Commission and sculpture sub-committee member Ken Auster dismissed such considerations, saying a commission’s fees and guidelines are set, not subject to negotiations more typical of a gallery sale. “I could not walk down half a block without being accosted if I accepted this,” he said.

Laguna Beach artist Terry Thornsley, known for executing several local public art projects including “Peacescape” at the Montage resort, in April won the $40,000 mural portion of the competition, also for the headquarters building.

“I find the idea of an artist submitting an edition for the price of an original unacceptable. Every Laguna Beach artist that has ever taken part in public art will contribute time and resources beyond financial rewards,” he said. “We would not skimp and sell something I’ve already created for someone else.”

His “To the Rescue” consisted of six identical sculptures of a swimmer set against a life-saver ring. The six swimmers are frozen, each with an arm raised and fingers pointed forward. Fairfield joked that the arms provide a visual trajectory toward the area’s restrooms, something that parents could give their kids as a landmark and thus also render the project site specific.

Casting each swimmer in a different stroke would have amounted to six sculptures as opposed to one and made the process prohibitively expensive, Fairfield said.  Ferguson suggested that the design could not stand out among the natural clutter inherent in beach scenarios.

Meanwhile Fairfield suggested that perhaps the images of the works should be published. “Let the public vote,” he suggested via e-mail.

Commissioners, however, declined to discuss how they will proceed. They will take up the matter again at their next meeting on Sept. 23.