Janet Dreyer earned a doctorate in molecular biology, but in her 50s enrolled at the Pasadena College of Art and Design and became hooked on art. After a hiatus from both science and art for travel, she’s back to art, creating a work that combines her training in both fields, “The Stem Cell Scientist.”

Dreyer’s computer generated work came to life at the request of Laguna Beach glass and multi-media artist Leslie Davis, who organized “The Art of Stem Cells.” The show features conceptual works by 29 artists. Their themes address debilitating diseases and injuries and the work of scientists trying to find cures. The month-long exhibition opens Saturday, Sept. 6, at the Orange County Center for Contemporary Art in Santa Ana. 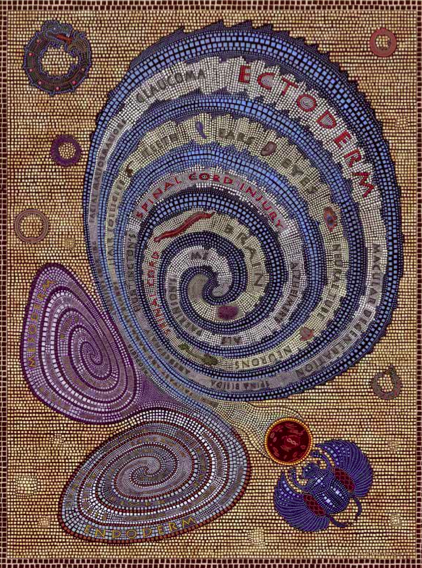 Dreyer delved into history when she built a mosaic for the show. The work includes references to the regenerating powers of the Egyptian scarab god Khepri, showing him rolling a cell instead of the sun, among other images. “I chose the mosaic format because the tiles create a sense of motion reminding me of developing cells,” Dreyer said.

The exhibition’s opening and closing receptions will not only showcase what results when artists interact with 23 scientists, but also introduce art patrons to researchers and examples of their state-of-the art stem cell pursuits. Half of all proceeds will benefit research at the center, led for the past eight years by Dr. Peter Donovan, to whom the show is dedicated. 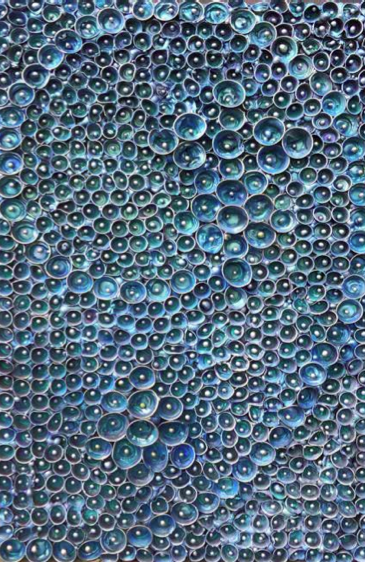 With a keen interest in science and particularly stem cell therapy, Davis has forged a connection to UC Irvine’s Sue & Bill Gross Stem Cell Research Center. But since 2005, Davis’ twin interests have yielded three other medical related art exhibitions, including one for Mission Hospital.

It was her brainpower that led to pairing center researchers with artists selected on the strength and nature of their work.

Her own work, “Gastrulation,” combines a glass base with finely sanded circles and ovals from Manzanita branches, representing growing and dividing cells. It was based on her conversations with Donovan, whose research involves basic stem cells and those that differentiate. Working also with Brian Cummings, another Ph.D, Davis included “Vanishing Point,” a glass and metal sculpture dedicated to her stepmother, who suffers from Alzheimer’s, and “Born Again, Renew,” a tribute to stem cell’s possibilities.

Cummings studies the application of stem cells to neurological and spinal cord injuries. “We have gone from idea to clinical trials on humans in a short span of time but we are five or 15 years away from administrating actual commercial therapies,” he said. NeuroNebulous, a photograph of a culture dish filled with what Cummings describes as embryonic cells, could stand alone as a work of art. “It is fascinating how art and science overlap,” he said.

Linnig uses the image of a darkly centered spider web to illustrate the process of macular degeneration, where the afflicted gradually lose their vision until central images resemble black holes.

“I decided to put a face representing all of humanity on the research and its benefits,” he said.