With hundreds of well-wishers reciting his name three times in unison, Hobie Alter’s daughter Paula concluded an outdoor memorial service on the Aliso Creek golf course fairway, saying “we release you to the elements: earth, air and sea.”

Hundreds more are expected at Doheny State Beach to further fulfill that promise by joining a memorial paddle-out ceremony, scheduled for 4:30 p.m. Friday, April 18. The gate fee will be waived from 4 to 7 p.m., according to a notice at hobie.com.

Last week, the self-taught inventor who began shaping surfboards in a Laguna Beach garage in the ‘50s and went on to redefine the sports of surfing and sailing, was remembered as a “genius and a gentleman” by employees, friends and family.

Several classic woodies fringed the fairway for the twilight service on Thursday, April 10. Above the first tee, a replica of Alter’s first surf shop in Dana Point was set up. Among several surfboards on display was an early balsa wood version, its rails set off by dark-stained runners. “Hobie” was hand-cut into the tail end, over a wooden fin. White foam surfboard blanks partially circled the faux shop, pinned with brown paper notes of remembrance like oversize fish scales.

One of the most colorful anecdotes about Alter came from business partner Dick Metz, who lived in Hawaii for 20 years, establishing Hobie surfboard and sailing shops in the ‘60s. “If he hadn’t show up, I’d still be tending bar at the Sandpiper,” said Metz, who described his plan to welcome his friend to the islands in rousing style.

Metz enlisted two women to shower Alter with kisses and Hawaiian leis when he set foot on the airport tarmac. The slightly inebriated women yelling “Hobie! Hobie!”  mistakenly rushed past Alter and instead lavished another unsuspecting passenger with a Polynesian welcome. “Wow. This is a great place; this is paradise,” the surprised visitor said. A befuddled Alter looked at Metz, laughing uproariously, and said, “I thought they called my name.”

Hobie surf shop co-owner Mark Christy, also an owner of Aliso Creek, told the crowd he plans a memorial on the course’s sixth hole, where Alter once shot a hole in one.

While Christy noted that Alter is known for improving every product he touched, less well known is how he imprinted his values – generosity, loyalty and disregard for conformity – on his friends and employees. “Without question, it’s the character and integrity that’s the truly incredible part of the story,” said Christy, who described Alter as a mentor whose influence guides his daily decisions.

Ruth Triglia, an early employee who worked for the Hobie Cat sailboat company when Alter still owned the company, echoed that sentiment. “He set the culture. He taught us to live in living color,” she said, describing her former boss and friend as “a genius and a gentleman. He was as much one as the other.”

“He taught all of us to search for answers that aren’t obvious,” added Christy, noting that Alter’s only flaw was his refusal to embrace expressions of gratitude. “Every time I tried to thank him, he would change the conversation,” said Christy, who was recruited years ago by Alter and his business partner Dick Metz to operate the Hobie stores, then in bankruptcy. Christy’s sister, Laurie, is married to Alter’s son, Jeff, all of whom live in  Laguna Beach.

Paula Alter, at an Aliso Creek memorial service for her father Hobie Alter, asked well-wishers to send him a blessing for his next ride.

Mark Christy, who was recruited into the Hobie empire, described Alter as a role model who taught him to search for solutions beyond the obvious. 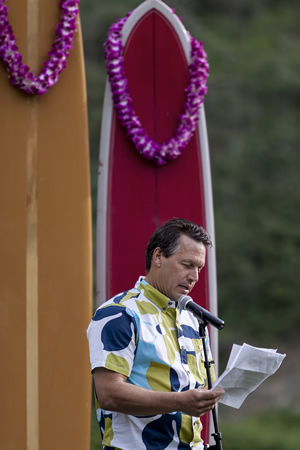 When Jeff Alter stepped to the podium, no one could miss his resemblance to the photo behind him of his father tugging on a halyard and sailing a Hobie catamaran. “My father was about building a better mouse trap,” recalled Jeff Alter, who described an episode as a 14-year-old where he and his father literally trapped a mouse and set the rodent free on the beach.

Even in recent years as his father’s health deteriorated, “it was hard to keep him from being that handyman. He was the first one to get his hands dirty. His joy was to make things better for all of us,” said Jeff Alter, urging the crowd to “step back, make a bottom turn and have a Hobie day.”