A 14-year-old Laguna Beach girl has died after the SUV she was in collided with a parked dump truck on Laguna Canyon Road Tuesday morning, according to authorities. The girl’s 11-year-old sister and the Laguna Beach man who was driving the vehicle are hospitalized with serious injuries.

On Tuesday, Nov. 5, at 7:47 a.m., Laguna Beach police officers responded to a traffic collision in the 700 block of Laguna Canyon Road involving a parked dump truck and a 2001 Lexus SUV.

The driver of the Lexus, identified by authorities as a 74-year-old male Laguna Beach resident, was driving a 14-year-old girl, seated in the rear seat, and her 11-year-old sister, who was seated in the front right passenger seat, to school. Police said the driver is a friend of the girls’ family, and confirmed that the girls are in 5th grade at El Morro Elementary and 9th grade at Laguna Beach High School.

“The Lexus was traveling westbound on Laguna Canyon Road, at approximately 50 mph, when the driver claimed he suddenly blacked out,” Sgt. Jim Cota said in a statement. “He lost control of the vehicle, causing it to drift towards the shoulder, where it collided with an occupied parked dump truck. The force of the collision caused the vehicle to spin out of control until it collided with a tree in the center median.”

LBFD paramedics arrived on scene and extracted all of the occupants from the Lexus, Cota said. All three occupants sustained serious injuries and were transported to Mission Hospital – Mission Viejo. Cota said the 14-year-old girl passed away from her injuries on Wednesday, Nov. 6.

The occupant of the parked dump truck sustained no injuries.

Cpl. Cornelius Ashton notified both schools and contacted the girls’ mother after the accident. Sgt. Cota, the acting lieutenant, responded to the scene of the collision and commanded the incident. 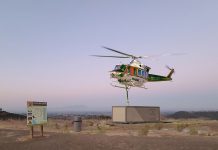