A beach scene once considered a nearly private Shangri-La by South Laguna residents is turning into what locals and city officials are calling a tourist tsunami.

And it’s not just the usual summer crowd, they agree; it’s a frenzy that’s been building for at least three years.

Susan Brown lives above Table Rock Beach, a rocky cove accessed by a cement and wooden staircase of 125 steps. “I see them morning, noon and night. There are kids down there 24/7, 365 days a year, all night long,” said Brown, who described the situation as “hideously out of control.”

Brown called police dispatch on Sunday, June 26, the same day a 46-acre fire ignited in Laguna Coast Wilderness Park, demanding the city’s law enforcement resources. She said a large crowd was gathering at the top of the steps. The dispatcher asked her if she observed anyone with a knife. If so, they could send an officer immediately, the dispatcher told her. “I’m not going to check to see if they’ve got a knife,” Brown said.

At a town-hall meeting led by police Chief Laura Farinella last Wednesday, July 13, police, marine safety, public works and Orange County parks and lifeguard representatives reassured two dozen residents that they are aware of the exponential popularity of south Laguna beaches and stepping up their game. After the hour presentation, residents were asked to voice their concerns.

Jaywalking, speeding, drunkenness, drugs, smoking marijuana and tobacco, all-night partying, tell-tale refuse and what they view as inadequate policing are driving some residents to the brink of considering vigilantism, saying they have to police their own property. The free trolley bringing riders from Dana Point isn’t helping either, they added.

“I’m willing to sign up,” said Pat Menne, who lives near the Thousand Steps Beach access and proposed a “vigilante” effort of residents to assist police. Menne and her husband Bryan said in a later interview that they’ve found people in their bushes and ushered them away.

“I’ve scooped the dumps of human poop out of our landscape,” said Menne. “We in the neighborhood need to take back our neighborhood.” Manning a check-point for alcohol at the top of the Thousand Steps stairs would be a desirable starting point, she said.

Police close and lock the gate at the top of the beach stairs at 10 p.m., but it’s opened by people still on the beach when friends call or text them from the top, said Farinella.

“If it weren’t for alcohol, 80 percent of my job would be gone,” police Sergeant Eric Lee, who supervises the south Laguna patrols, told the group. “Has it gotten worse? Big head nod.” Disturbance calls, emergency calls and parking tickets have all escalated, he said.

Most of the citations written by Orange County Parks, which has jurisdiction over South Laguna beaches, are for alcohol, said park ranger Kory McCain.

“In 2013, we wrote 64 citations, mostly for alcohol, glass on the beach, dogs on the beach. In 2015, we wrote 196 citations, a 206 percent increase,” McCain said. The county hired another ranger and three maintenance workers this year. “We’re trying to crack down on some of the things that are going on at the beach,” he said.

“Clearly you’re understaffed,” said Sally Coffey, who’s lived in south Laguna for 25 years. “In just the past three years, I feel like I’m in a different place. The noise is unbelievable.” Coffey said she’s seen cars spinning donuts in the middle of Coast Highway, almost hitting people in the crosswalk near Coyote Grill. “I’ve personally called in four accidents,” she said.

Police are going to “hit it hard,” making their presence known at south Laguna Beaches, 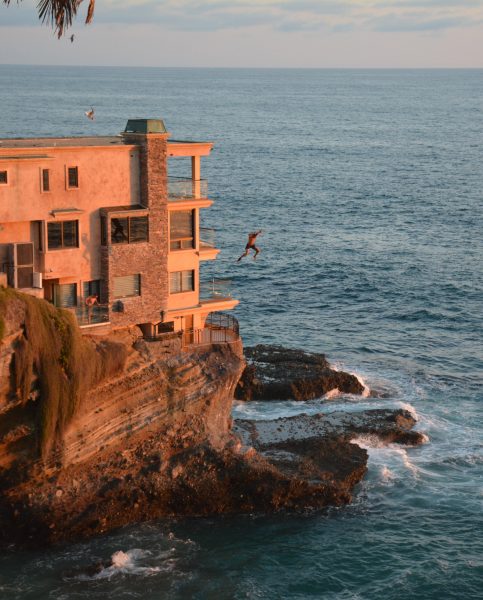 “Slowly but surely we’re seeing some positive effects,” he said.

While the MTV show “Laguna Beach, the Real Orange County,” in 2004, introduced the town to an international audience, the pervasiveness of the internet and social media sites that followed have led more visitors to Laguna, said Farinella.

So has new housing in nearby Irvine, Lake Forest, Tustin and San Clemente, she said. High inland temperatures are also bringing crowds to the coves. An endless summer of warm weather over the past two years has kicked Laguna’s influx of day-trippers and vacationers to 6 million a year, she said. 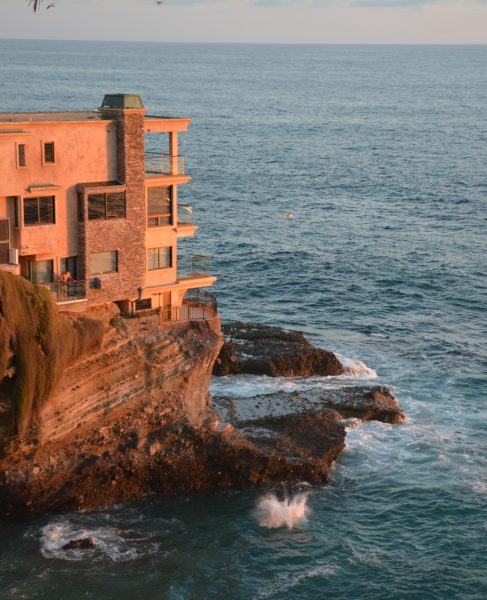 that runs alongside their home is becoming a nonstop escalator carrying a continual load of out-of-towners.

The “uptick” in beach-goers is occurring in the off-season, said OC Lifeguard Chief Jason Young, who supervises guards from Aliso Beach to San Clemente. “It used to be a spring break of one or two weeks, but it’s basically from February to the end of summer now,” he said. More lifeguards have been hired and are in the towers as early as February and March, he said.

Although appreciative of policing efforts, residents say police enforcement isn’t keeping up with the crowds. A first for the city, two full-time, all-year-round beach patrol officers, who can write certain citations but are not sworn officers, were recently hired. The police department will also hire two more sworn officers to its staff of 49, said Farinella.

“We’re all scrambling to regroup,” Farinella said of cities along the coast. “You might not think two means a lot, but it’s huge.”

Staffing needs to grow at a comparative rate to handle the crowds, she agreed. “I think we’re in that growth now, but sometimes it takes traction, it takes time to realize that this isn’t just one summer that’s hot. It takes that type of repetition season over season to see that this isn’t going away.”

Farinella said she’ll come back to the group with more ways the city can get ahead of the problem next year. “The genie is not going to get back into the bottle,” said Coffey.