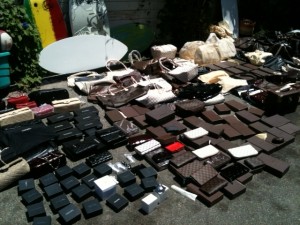 A tip to police from a knowing mother who suspected her daughter’s $70 bargain Louis Vuitton wallet was counterfeit resulted in a raid on a Laguna Beach shoe repair shop Thursday and ultimately the confiscation of $360,000 worth of phony luxury brand leather goods, police reported.

Police seized over 100 counterfeit purses, hats, and accessories valued at $100,000 from the merchant and another $260,000 worth of items from a supplier in South Laguna, who coincidentally showed up to conduct business and was detained by police.  Police also recovered two pounds of marijuana at her home, said Laguna police Lt. Jason Kravetz

Neither the shop owner nor his supplier was identified and no arrests were made though the investigation remains open, police said.

Contacted by Laguna police, handbag makers deployed their own private investigators, hired to halt trademark infringement, to make a purchase from the Cobbler’s Corner, 985 S. Coast Highway, Kravetz said. They determined their purchases were rip-offs of trademarks by makers that included Tory Burch, Dooney and Bourke, Chanel, Gucci, Louis Vuitton, Chloe and Jimmy Choo, Kravetz said in a statement.

U.S. Customs and Border Protection officials say counterfeiters are increasingly using international mail, express couriers and shipping services to deliver pirated goods, reflected in the declining value of intercepted merchandise in 2011, says a January report on seizure statistics. China continues to be the top source of pirated goods, accounting for 62 percent of $124.7 million in domestic seizure

Investigators seized scores of counterfeit luxury branded leather goods from a Coast Highway shoe repair shop in Laguna Beach on Thursday as a result of a search warrant. An astute Laguna mother, who questioned the authenticity of her daughter’s bargain Louis Vuitton wallet, sparked the inquiry, said police, who had yet to make an arrest at midday.