The rack of candy-colored kayaks and paddle boards stored for commercial use on the hill above Fisherman’s Cove was hauled out last Friday due to a surge of paddle-boarders who locals say are overrunning the cove there.

Their complaints of business activities being conducted on the beach, which is illegal under city code, prompted a crackdown that will make paddling less convenient for those renting kayaks and paddle boards in one of Laguna’s few protected inlets, which allows a gentle entry and exit shielded from strong surf, to first-timers

Since April, though, there’s been an upsurge in newcomers using the secluded cove in North Laguna after a relatively new paddle board company advertised a free event with yoga, food and t-shirts that proved to be the perfect storm.

Farr said even a temporary t-shirt store was set up on the hill above Fisherman’s Cove on a privately owned vacant lot.  The lot’s owner, Tom Tyson, has allowed locals to store kayaks, and now paddle boards, there for years, but declined to comment on the situation. 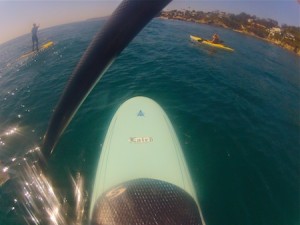 Some regular cove-dwellers say the newbies are now coming back and bringing “hoards” of friends.

“All of a sudden, there were like a 1,000 new people on our beach within the course of a month and a half,” said Brad Herron, a local at Fisherman’s Cove for 30 years. “Those people would come paddle, go buy a board and then be on the beach with all their people.”

Memorial Day, said Herron, was a madhouse.  “You got 12-foot boards coming by with 250-pound guys on them next to your 2-year-old,” he said.

The increased activity forced an established kayak company to permanently pack up equipment conveniently stored on the bluff there for nearly 10 years.  La Vida Laguna now keeps its kayaks and paddle boards at its shop a block away.  Paddle Board Bliss, the other company storing equipment on the hill, is now transporting its boards in a van.

City code requires that no payment for a recreational service being offered at the beach, such as surfing, kayaking, paddle board instruction or tours, can be exchanged on the sand.  Waivers must also be signed offsite.  Other companies teach at the beach but no gear is stored onshore.  “You can’t set up a business on a city beach because the beach is a public trust,” Snow said. 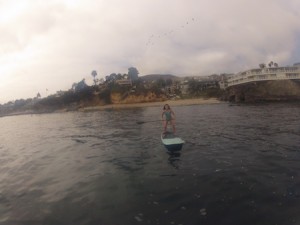 Farr said the city is primarily concerned with companies offering stand-up paddle board lessons on the beach, and is looking for compliance.  No citations were given.

The complaints started when Taylor Chaput’s business, Paddle Board Bliss, went ballistic. She got hooked on stand-up paddling when her mother introduced her to it with a tour to Seal Rock just north of Fisherman’s Cove three years ago.

After an accounting internship, Chaput has been giving classes and tours for two years, advertising through an online coupon service.  When she offered a free paddle-boarding class to promote a summer series with YogaWorks, it was the locals turn to go ballistic. They started complaining to City Hall.

The April 29 class also promised free samples from a vegan restaurant and t-shirts for a local charity event.

To appease complaints, Chaput has called it kaput at Fisherman’s, where houses, including her mother’s, abut the bay.  She’s moved her operations to Diver’s Cove, a popular beach at the south end of Heisler Park that does not directly face residents.

And no more online discounts, she said, or classes with YogaWorks for the time being.   Jean Connelly, manager of the South Laguna YogaWorks office, said sign-ups for continuing the combo classes didn’t materialize so the studio is rethinking its marketing approach.

Billy Fried, owner of La Vida Laguna Eco Adventures, has been launching at Fisherman’s for almost 10 years.   As well as carting his kayaks and paddleboards back to his shop, Fried has agreed to end weekend lessons and tours by 1 p.m.  He said no one complains nine months of the year, only when the summer crunch is on.

Some Fisherman Cove regulars disagree.  One 40-year resident, who requested anonymity, doesn’t like the idea of people profiting from public beaches.  She said the small cove has turned into a “mini Waikiki Beach,” except that this one hidden from public view. “It’s not happening at any other beach, just our beach,” she said.  Another concern, she said, is that hotel guests being shuttled in for lessons and tours.

Changing locations and shortening weekend operating hours won’t change any of that, she said.  “They have been doing this for so long that there are still hoards of people coming down to that beach.”

But Herron noticed the difference after Bliss moved south. “This weekend was back to normal,” he said. “Things were great. Up until this weekend, it was chaos.  The city just has to come up with a plan to regulate it.”

On her website, Chaput offers a series of classes throughout the day, much like a yoga studio. “Obviously, I want my business to grow and I’m not trying to disrespect anybody,” Chaput said.