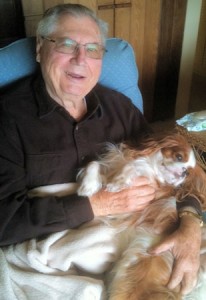 Bill was born in Bird’s Point, Mo., a small town on the Mississippi River settled by his ancestors preceding the Louisiana Purchase of 1803 before it was part of the United States.

He served 10 years as an Air Force officer, flying as a navigator with the Mighty Eighth Air Force out of England during World War II, and later trained as a weather and radar officer.  After serving his country, Bird returned to the University of Missouri where he earned a degree in electrical engineering.

After his graduation the Bird family came to California where he worked a decade for Hughes Aircraft. He then joined North Electric Company, later acquired by ITT, where he worked as a regional sales manager in their power supply division for 20 years.

Bird retired to his home in Emerald Bay in 1984.

Bill and his wife Nancy loved to travel and enjoyed trips to Mexico, Central America, Vietnam, China, Norway and Europe as well as cruises too numerous to count.  His exuberance for life and love for his family is what all of us will miss the most.

Bill is survived by his wife of 64 years, Nancy Bird. They have lived in Emerald Bay for the last 49 years.  Other survivors are daughter Laurie (Mike) Hefty of Laguna Niguel and their sons, Bob, of Laguna Niguel, John, of Cabo San Lucas, Mexico, and Tim, of Boise, Ida.; son William D. (Cindy) Bird III, of Chesterfield, Mo.; and daughter Sarah Ann Bird of Turku, Finland. He leaves five great grandchildren.