Summer is fast approaching, which means it’s nearly time to celebrate the arts in Laguna Beach. The popular Sawdust Art & Craft Festival and the nearby Art-A-Fair both open their doors at the end of June, while Festival of Arts and Pageant of the Masters launch their annual festivities in early July

And the Laguna Playhouse does its part for the arts this summer with a production of the ever-popular musical, “Mamma Mia!”

For me, this means dining out in Laguna Beach prior to (or even after) attending a play, the Pageant, or one of the arts shows.

Options abound in Laguna Beach, from casual spots like Moulin Bistro to more formal restaurants such as Broadway by Amar, but don’t worry about donning your best duds—casual clothes are de rigueur during the summer.

So, too, are summer menus at local restaurants. Seems like everyone is changing dishes with the seasons. I’ll be profiling various Laguna Beach restaurants and experiences over the next few weeks, starting today with two restaurants I recently visited to sample new menu items: Central, and Ocean at Main.

Central Laguna Beach opened in June of 2015 in the spot once occupied by Sundried Tomato Cafe. I dined there several times when it first opened and seemed to recall the cuisine was focused on Central American flavors, hence the name.

I dined at Central last month for a media tasting event and was pleasantly surprised to find that the cuisine had evolved to what Managing Partner Anna Montoya called “American fusion with global influences.”

Montoya is Peruvian, Italian, Japanese, French and Spanish, so the global influences are obvious. She told me the restaurant’s evolution was driven by what diners from Laguna Beach told her they wanted, although her intent from the beginning was a hybrid of old world and new world.

The menu for the media tasting did embrace old and new, starting with the skirt steak empanadas with cherry tomatoes and spicy aioli, a perfect starter.

The El Cubano with smoked lomo, pork belly, pickled tomatillo, swiss cheese and dijonaise inside a brioche baguette is a brilliant take on a Cuban sandwich and comes with a side of fries.

I also enjoyed the simple yet addicting take on truffle mac and cheese. The panko-crusted cod with crab and cauliflower puree was another favorite dish, as was the tiger shrimp risotto with spinach and lemon butter.

Among the new cocktails, I cannot give enough praise to the Perfect Saint made with prosecco, St. Germaine, berry simple syrup, and lemon. It’s light and fizzy, and a perfect starter to an evening of dining pleasure. 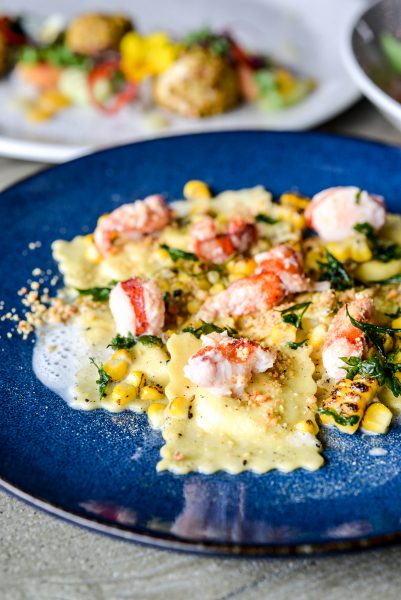 Last October, Chef Craig Strong left Studio at the Montage, where he carved a name for himself thanks to fresh, creative cuisine, to open his own restaurant called Ocean at Main (which is the exact location of his restaurant—Ocean Avenue near Laguna’s Main Beach).

He took over the 1940s-era building designed by Aubrey St. Clair that once housed Laguna Federal Savings and Loan and then several restaurants prior to Ocean at Main.

I’ve dined at Ocean and Main several times and have fallen in love with Chef Strong’s creative yet approachable take on California Coastal cuisine.

I returned to Ocean at Main last month accompanied by several fellow Firebrand Media writers to sample the new summer menu, which Chef Strong said was the first major menu overhaul since he opened.

“I changed about 60 percent of the menu,” said Chef Strong. “Here’s the challenge: some people say I want you to never change these dishes because I have fallen in love with them. And then there are those who have eaten their way through the menu twice and are ready for something new.”

Since we were hungry and eager to share, we ordered all new menu items, including the burger, which uses A5 Japanese wagyu aioli and a brioche and potato roll bun. Add caramelized onions and crispy shallots to the burger, and you have a beautiful handful of burger goodness. Oh—did I mention the truffle fries on the side?

“It’s an elevated burger and fries, and it tastes amazing,” exclaimed Chef Strong.

Chef Strong’s shrimp roll was a tasty match for the burger. He fries the shrimp tempura style, adds a spicy sauce and a brioche roll, and the result takes the concept of a lobster roll in a new direction.

His Philadelphia-style shaved steak sandwich is legit, not surprising since Chef Strong spent some time cooking in Philly.

Our verdict on the new menu items: sensational! We could not decide on a favorite, although the burger and the shrimp roll were notable winners, as were the crab salad and the lobster ravioli.

So much food we did not have room for dessert. Another time, for sure.