When she is not making prints, she’s teaching art. When she’s not encouraging artistic expression among seniors, children and anyone in-between, she’s serving in a supporting role for Laguna Beach arts organizations.

Such involvement as a docent, print maker and mixed media teacher at the Festival of Arts and Laguna Outreach for Community Arts has earned Carla Meberg a nomination as artist of the year by the Laguna Beach Alliance for the Arts. The organization’s Art Star awards are made April 12. 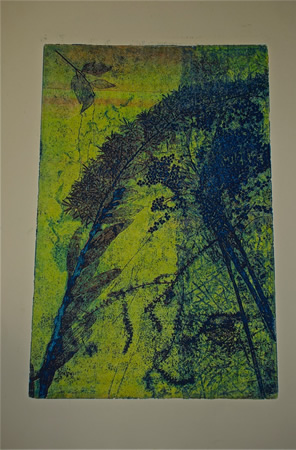 “Usually nominated artists are better known for their art than their active support for the arts,” said Betty Haight, a Festival exhibitor and board member of LOCA, which provides arts education to the community. “Carla is the go-to person for any arts organization in town, one of those people who steps up to the plate and does whatever needs to be done.”

“Summer here is like art camp; it’s so much fun to be surrounded by beautiful art and being able to teach adults and kids,” said Meberg of her roles as teacher and docent. “People come in thinking they can’t draw and then they’re shocked at what they can do with their hands,” she said. 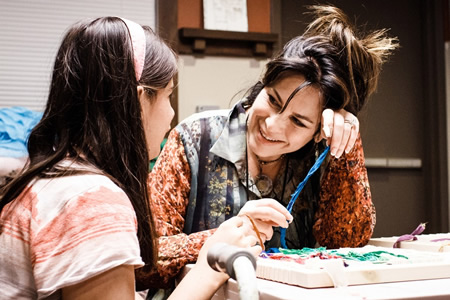 Meberg’s nomination was nearly unanimous, said LOCA co-founder Mada Leach. The print maker, who lives in San Clemente, donated a $10,000 printing press to LOCA that allows the organization to offer printmaking classes from beginning to advanced on the Festival grounds, Leach said. “She could have easily sold that press but instead wanted it used by the community,” she added.

Meberg earned a bachelor’s degree in communications from Cal State Fullerton where she also studied photography. She also began pursuing a master’s degree in psychology, which involved working with patients who suffered from a bi-polar disorder and depression.

While taking art classes at Saddleback Community College she discovered her passion for print making as well as her talent as an activist. “When they threatened to discontinue print making classes, we fought it and fortunately prevailed,” she recalled.

“She empowers older women at the senior center by expanding their creative horizons and by teaching them how to use power tools. Carla will bring in drills and saws, stuff we women of certain ages aren’t around very much,” said Leach.

Meberg gets particular satisfaction teaching LOCA classes at Glennwood House, a Laguna Beach residential facility for developmentally disabled adults, and at the CSP Youth Shelter, whose residents she also helps as an advocate in court. “Art can heal people, it can change the way a person thinks. I am dying for anyone to know that they can do art,” she said.

Another of her goals is to encourage other artists to teach by inviting guest artists to share their skills with her students. “The kids, for example, don’t even look at you when they are starting out. Then, a few weeks later, they are smiling. The transformation is incredible: with art we can live in the past, future or at the moment.”

When not immersing herself in the community, Meberg travels to visit the world’s top museum capitals, such as Rome and Paris. Next on her list? Berlin. Favorite local museums are The Norton Simon Collection in Pasadena and the Getty Museum in Los Angeles.

Her prints run the gamut in style and subject matter. One of her stylistically influential teachers was the late Patrick Merrill, known for his strong, linear depiction of deeply personal, often apocalyptic subjects. Currently, she is expanding her repertoire of viscose printing, a process developed in the 1960s in Paris that incorporates relief and intaglio printing. It allows an artist to use multiple colors on the same plate.

It wasn’t until her prints were juried into a show in Fallbrook in 2010 that Meberg finally felt like an artist. But working at the Laguna festival opened an even more satisfying path for her.

“I had no idea how much I loved teaching, especially children. It opened my eyes to what I could really do as an artist; share the exhilaration of creating art.”