By Jennifer Ericson, Special to the Independent

With the opening of Asada restaurant and Reunion Kitchen + Drink later this month, restaurateur Scott McIntosh hopes to end the high turnover of dining spots that has been the bane of the Boat Canyon shopping center in recent years. “I plan on being here for a good long time, and I want the locals to feel it’s their spot,” said McIntosh in a recent interview.

The fact that the concepts for both restaurants have already enjoyed success elsewhere may bode well.

Even so, popularity in other locations didn’t prevent Senor Fish, the previous tenant in Asada’s space, or Umami Burger, the occupant before Reunion Kitchen, from closing their doors after relatively short runs.

McIntosh believes he’s got a formula to change that. “Maybe it’s not the greatest of locations,” said the industry veteran who finished a 26-year run with Claim Jumper as chief operating officer and was involved in launching Nick’s Laguna Beach. “But, to me, I see nothing but a great opportunity to have a little niche right here and a good following from the north end of town.”

Citing some perceived disconnect between the previous tenants and their client base, and undaunted by the lack of foot traffic, McIntosh said the Boat Canyon center has plenty of parking and a “good little synergy” for a “truly local” restaurant where people are running errands and “you’re going to run into your neighbors.”

McIntosh opened the first Asada, also his first solo venture, in downtown Laguna Beach in July 2011, two doors down from Nick’s. With its bright airy space and a menu boasting high-end Mexican fare mixed with “comfort food” options, Asada had the right ingredients to cook up a loyal following among locals. Unfortunately, unlike his relationship with the public, McIntosh’s relationship with the building’s landlords, who were also part owners in the restaurant’s parent company, curdled, resulting in a bankruptcy filing, a court battle and finally the shuttering of Asada in October 2013.

Even as he was winding down Asada, McIntosh was working on Reunion Kitchen + Drink, which opened in Anaheim Hills in December 2013, this time with new investors, Terry Hackett and Jack Jakosky, who are also his landlords. Though the landlord/partner scenario proved a recipe for disaster with the original Asada, it is a key ingredient to his current success.

When McIntosh severed ties with his original Asada partners, he held onto the right to its name, not ready to give up on the concept. In a fortuitous twist, his new landlord/investors have helped him revive it.

“Scott is our partner in a very successful restaurant …, and we have developed a relationship with him over the past few years,” said Hackett. Since he and Jakosky also own the Boat Canyon center, they decided to team up with “a true chef operator” to fill the vacancies there. They tasked McIntosh to come up with restaurant concepts to “upgrade” the center and, with the center’s other eateries, create a “restaurant gathering place” for North Laguna.

Asada in Boat Canyon manages to be a sort of a “mini me” version of the original. With a smaller space and trimmed menu, it still evokes the same vibe as its predecessor. Necessarily more casual, food is ordered at the counter, though servers bring it to the tables in a model similar to La Sirena in South Laguna. They also have a take out service that will soon include online ordering and curbside pickup.

The pricier steak and fish entrees from the original restaurant have been 86’d, but many menu favorites remain, such as the bacon-wrapped jalapenos and short rib tacos. “I know that I’m really trying hard to hit the right price point with value and quality,” said McIntosh, who has been working tirelessly to address any glitches popping up in the opening week.

A recent Monday-night take-out order showed success on that front. An articulate employee answered the phone to take my order and politely inquired if I would mind holding as “the registers were all in use.” “Here we go,” I thought, preparing for an interminable wait. But within minutes my call was retrieved and my order taken and repeated back to me. It would be ready in 15 minutes. I pulled into the lot, had no trouble parking, and in the just-past-dusk evening glow I caught the stress-free vibe of the center, first passing the soon-to-open Reunion space, then a table of people lingering on the patio outside of Jan’s Health Bar, and then another group of diners inside and out of Gina’s before reaching Asada where a little more than half of the seats, inside and out, were filled with convivial diners at 8 p.m. I walked up to the counter behind a mother and daughter to see my order waiting for me behind the counter. The server cheerfully double-checked with me to verify that I was receiving what I ordered, and I was off. As I turned to go, I glimpsed McIntosh chatting happily with a few customers. 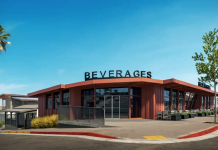