The boys 83rd season opened this week at the Godinez Grizzly tournament and Coach Bret Fleming is expecting another run for an Orange Coast League title. Breakers have won nine titles in the past 10 seasons and Fleming is 199-107 in the 11 seasons since returning to Laguna. Fleming also coached Laguna from 1991-2000 and is 335-234 overall for 21 total seasons at the helm.

Season opened this past Thursday, Dec. 1, with Capistrano Valley. The Breakers will be hard pressed to match the success of recent seasons. 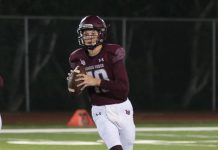