Laguna overcame a number of missed opportunities in the first half of the quarterfinal contest against Northwood (8-4) to take control of the game in the third quarter to roll over the host Timberwolves 34-13 in a contest played last Friday night at the Irvine High School Stadium. The victory sent the Breakers to the CIF semifinals for only the tenth time in 84 seasons of play. In recent years Laguna has made it this far three times losing to Corona del Mar in 2011, Garden Grove in 2012, and Santa Ana in 2016. The game will be Friday, Nov. 16, 7:30 p.m. at Artesia High School (9-3) off the 605 Freeway at Del Amo. The two schools have a common opponent in Western with Artesia losing 72-31 on Oct. 5 and the Breakers falling the next weekend 47-35 in a lightning delayed contest.

Breakers kicked off to the Timberwolves and forced them to punt after just three plays. Laguna had an 11-play drive to the Northwood two yard line but Andrew Johnson was sacked on the fourth down play. Northwood completed a long pass play on their first snap but fumbled the ball on their own 48 yard line. Sean Nolan picked up the loose ball returning it to the Northwood 26 yard line. Five plays later it was 7-0. Northwood’s next possession ended in a Shane Lythgoe interception. Breakers could not take advantage of this and were forced to punt.

Northwood drove to the Laguna 18 yard line but turned the ball over on downs. Two great sacks by a group of Laguna defenders that included Calob Molstajo, Curran Hendricksen and Clay Gershenson were responsible. Breakers had their try stopped on a mid-field interception with no-return. This sparked the Timberwolves to drive the 50 yards mostly on a tipped ball pass play and score midway through the quarter. Breakers took the kickoff and had a 10-play drive to the Northwood nine yard line but lost the ball on an end-zone interception for a touchback. Northwood tossed a pick of their own as Kai Ball nabbed the ball on the Laguna 31 returning it to the 36. A perfect Andrew Johnson to Sean Nolan pass play went 63-yards for the score. The Noah Handel PAT looked good but was declared wide by the officials.

After an exchange of punts, Laguna scored twice on a 63 and 79 yard drives that consumed most of the time. Northwood was held to 26 yards on 12 plays.

Sean Nolan intercepted Northwood’s second play of the quarter setting up the Breakers final touchdown. After that score, Laguna freely substituted as did Northwood after their touchdown. Sam Tyrrell had some nice runs with the game ending on the Northwood 4 as the Breakers took a knee. Timberwolves still lead the all-time series 8-3. 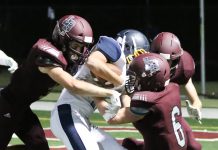