Stroll along the glorious bluffs of Heisler Park in North Laguna around seven in the morning and you’ll eventually find a small pack of dog treat donors and their pups huddled together.  Most of the dogs sit patiently, but for one that snaps hungrily at every offering of a doggie delicacy. Rick, the originator of the custom of treat-giving 11 years ago when his yellow lab was alive, stands five feet back and tosses carrot-coated chicken strips from afar into the mouth of the surly beast.

I raced with my satiny-coated yellow lab, Crystal, on the streets of South Laguna for 12 years,

until we moved to the north end of town two years ago. She dawdled behind me on our first walk in Heisler, slowly making her way towards the boardwalk where she spotted two labs below us.  They stretched their snouts upward towards the extended hand of a man who gave each dog a few biscuits. Crystal’s pace quickened as she pulled me down the stairs.   We approached the thin man we now know as Rick. He was dressed in a Big-Dog black and white plaid hoody and when he stroked her, he asked,  “Can I give your dog a treat? My lab died last year.“  Crystal’s tail wagged vigorously. He wasn’t fooled by her jauntiness. He petted her again and said, “She’s getting up in years, isn’t she? Can I give her another treat?” He knew full well labs never say no to food.

Crystal and I searched for Rick for months after our first meeting, but when we spotted him again, he strolled by on a mission without making eye contact. Finally, we saw him with a diminutive woman walking Jasper, a miniature poodle-mix. This time Rick noticed Crystal, her tail in full propulsion. He gave her treats like bacon wrapped venison and dog-jerky. The tiny woman petted her lovingly and added two more morsels, the second with the admonition, “to clean your teeth.” 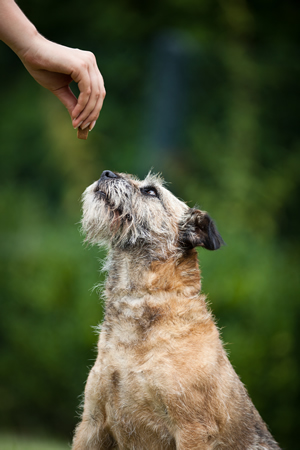 Over the next six months, Crystal met more and more dog treat donors on her bluff-top walks, but Rick and Jasper’s owner remained her favorites. Her pace became even slower, unless she saw one of her benefactors; then she would fly towards them dragging me along behind her. Jasper’s owner gave me goodies to feed her dog till finally I started bringing my own.  At first I felt awkward, almost nerdy giving out treats even to dogs whose owners didn’t reciprocate.

Finally, I arrived at an obvious revelation about the essence of giving we all seek at Christmas. I started carrying three different types of biscuits and giving each pooch, friendly or frisky, its goodie of choice. Six months ago, the arthritis that affects the hips of aging yellow labs rapidly advanced and Crystal became unable to walk along the bluffs.

The dog walkers of Heisler have taught Christmas giving so well that I will soon walk The Park without a dog, offering treats and telling stories to the dog owners about my yellow lab who used to love to walk here.

Ed Kaufman, a psychiatrist practicing in Laguna Beach, also hosts OC Dime Stories/Laguna Beach, a monthly gathering at the Laguna Culinary Arts, 845 Laguna Canyon Rd., where writers can read their short stories (www.dimestories.org;  e-mail: [email protected]).  He is the author of “From Monks to Mountain Gorillas.”