Three crows swoop overhead and I follow them in the old kayak towards what used to be Laguna Beach. Skeletons of buildings covered in mussels and sea anemones rise up through the fog like fossils of ancient sea creatures. I ignore the fear rising in my gut. Twelve is too old to be scared. I wonder what this village was like 200 years ago, before rising waters and earthquakes destroyed it.

I pick up speed as the tide sucks the water out of the ruins. I can’t risk getting pulled into open water, so I drag my paddle and turn left. According to the sign sticking out of the current, I am on Forest Avenue. I’ve never seen a forest.

There are many things I’ve never seen, but I did read a book recently, and that book is the reason

why I’m steering a stolen boat towards a forbidden place. In it, people gathered around a lighted, star-topped tree holding brightly colored boxes.

“It was called Christmas, Kellin,” Mother told me.

Imagine, a tree in a house, warming the room with its golden light.

I think of my tired mother sitting in our dark canyon home and of the long winter nights to come. This year, I will make Christmas for her, and for that, I need a gift.

Sometimes, my friends and I find pieces of the old village’s treasures: a shard of green glass, a plastic dolphin, a metal woman with fins. I have to find such a treasure today, so I can place it under the tree I will build for my mother.

I pull over to my favorite building, the one with the faded sign that says “Fire Department,” whatever that was. I can’t resist climbing on the giant red machine that sits inside. So many gauges and buttons. What did they all do? The crows land at the hole in the roof.

“Nothing to see here.” I wave my arms, but they don’t budge.

I peer over the machine’s edge just as a ray of light hits the water. Something glints beneath the grayness.

Probably an old pipe. But then, it sparkles again, brighter than anything should be after a lifetime under water. I lean forward. Yep, there’s definitely something down there.

No time to be a coward. I jump. The frigid water takes my breath away. I picture Mother’s beautiful, worn face, and I dive, sweeping the sandy floor until I touch something hard, metal.

Back at the surface, I thrust my prize into the light. It is a golden disk emblazoned with rays of sun and an eagle. A thing of beauty.

“Batt. Chief. Laguna Beach Fire Department,” my voice echoes in the wet chamber. “What’s that?” One crow caws in response.

As I reach to pull myself out of the icy water, the building lurches as if a giant has given it a great kick.

This time, the crows flap away.

The water sloshes against the walls and tosses me like a piece of driftwood.  The metal disk is gone. I have to get out of here. I swim, numb and clumsy, outside.

The current immediately slams me into a man-shaped rock and the world becomes a jumble of stars and white foam. Two hands appear before me. Not possible, I think, though I swear I see feet below. I reach out. No, not hands. Just cold, slippery rock.

No one knows I am here. 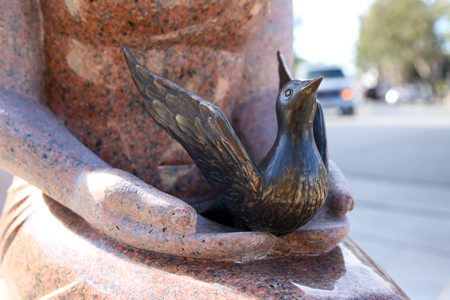 Suddenly, a flash of orange. The kayak! I snag it with my boot, but then I feel the rock I’m holding break apart. I splash into the watery chaos, still clutching a chunck of my rocky lifeline. The village floats past me much too quickly as I pull myself into the boat. All I feel is anger. There’s no thrill in my adventure, just fear.

“You’re cowards! Go ahead, fly away!” I pick up the rock that sits next to me and aim it at them, but something stops me. In my hand is a small stone bird resting on a perfectly sculpted hand. And then, I remember the three headless statues sitting in a circle outside the red machine.

The surf drowns out the crow’s screeching. I have to act fast, or I’ll be washed out to sea. I drag my arms through the water and aim the kayak towards a doorway. I slam into it and grab the wooden frame, ignoring the slivers piercing my hands.

I look down at the stone bird resting in my lap. If it can outlive the people who made it and the nature that wants to ruin it, then I can hold on to this rotting beam until the tide turns. Yes, I can make my way back home.  And that will be the best gift.

Amy Francis-Dechary passes by the Laguna Beach Fire Department’s Station One when she drives her children to Top of the World Elementary.

County: Laguna Beach Has 29 Residents Who Tested Positive For COVID-19