She guided the 95-year-old Laguna Playhouse from thin into thick and now Karen Wood is signing off after eight years as its executive director. 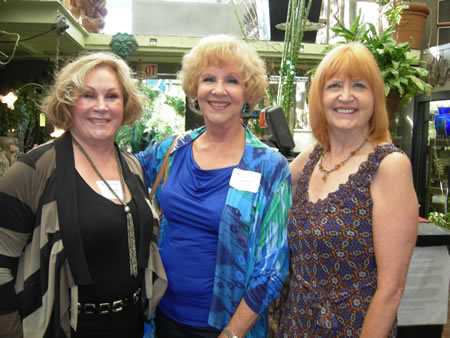 Recruited in 2008 from the San Diego Repertory, where she had also spent eight years, Wood possessed skills that enabled her to guide the playhouse through the great recession of 2007.

“Karen”s greatest strength was at crisis management, leading theater operations through the most difficult time in 50 years. We survived,” said Joe Hanauer who co-chairs the playhouse’s board with Paul Singarella. The latter was unavailable for comment, but said in a statement that the theater is on solid ground building on Wood’s accomplishments.

“At the time, I was not looking to leave San Diego, but was recruited by the Playhouse,” Wood recalled. “I was thrilled at the opportunity since I found that my skill sets and passion made for a good fit.”

Hired initially as managing director and promoted to executive director, she transformed a more than $1 million operating debt into a currently debt-free state and an operational surplus by restructuring the theater’s business model.

That included the theater selling a building it owned next door, abandoning plans for a second production center in Lake Forest and opening the stage to outside groups.

Finances received a boost when the Playhouse began to serve as the home venue for the Laguna Dance Festival and Laguna Beach Music Festival, and host performance for Laguna Beach Live and others.

Wood’s efforts earned the Playhouse a Spirit of Laguna/ Best Business Award from the Chamber of Commerce and a 2011 Art Star nomination from Laguna Beach Arts Alliance.

Wood’s successor will be expected to draw from a somewhat different play book.

“Operation is one element only. We are searching for someone who can attain fundraising goals by representing the theater on the outside and form a partnership with Ann E. Wareham and Donna Inglima,” said Hanauer, referring to the artistic director and youth theater director, respectively.

Hanauer said that local audiences have increased, but that 70 percent of tickets are still sold to non-residents. He also hopes to increase donor revenue and ticket sales by seeking a more diverse audience. Now that the theater is on more solid financial footing, he envisions more adventurous programming.

“Ticket sales produce a large part of our revenue so we will give the audience what it wants,” he said.

In order to attract younger audiences, the Playhouse will offer special pricing promotions for high school students and their parents next year, he said. “Improving the physical plant of the theater will also help produce more complex theater,” he said.

“Theater will always be a foundation of Laguna Beach. We want to provide critically acclaimed theater to large, diverse audiences who enjoy what we do.”

Under Wood’s tenure, Ann E. Wareham was hired as artistic director after the departure of Andrew Barnicle. Notable productions include five of Hershey Felder’s solo gigs as composers, special appearances by Hollywood stars like Val Kilmer and Ed Asner, and critically acclaimed productions such as “The Year of Magical Thinking,” “The Pianist of Willesden Lane,” and “Footloose” among others. International star Leslie Caron appeared on stage at age 81 in “Six Dance Lessons in Six Weeks.”

Wood emphasized that she worked with a superlative team. “Theater is a collaborative effort, she said.

Coming from an arts-oriented family where her father performed in a country and western band, she said that performance was in her blood. “When I saw the ‘HMS Pinafore’ at age 6, I was hooked,” she recalled.

A Laguna Beach resident, she describes her future plans as fluid but definitely involving theater, the arts and community involvement. The future does not exclude New York where she would love to be part of a Broadway production, she said.

Wood has committed to a smooth transition until her contract expires in February.

The Playhouse hired the Arts Consultants Group to search for her successor.