As guests arrived on the red carpet for the debut of the independent “Greeter Documentary,” they had the chance to meet the star of the show. Michael Minutoli, Laguna Beach’s current greeter, pedaled his famously photographed bicycle around the venue last month outside while talking kindly to movie goers and wishing them a “happy Laguna Beach.”

Like everyone else, Minutoli waited in suspense. “I haven’t seen it yet either.” The venue Seven Degrees had been split into three viewing areas, each with its own screen. The first of two screenings began at 6 p.m. and it appeared to be a sell-out.

“Michael, thank you for sharing your gift with the world and for being you,” said film producer and local resident Martin Yewchuk, who also thanked a long list of community supporters. It was obvious locals also embraced his Elestial Productions effort.

“We had lots of love and support at the premiere, over 450 people were there,” co-producer Tabitha Yewchuk said. “We had to turn people away.” Another showing may be a possibility, as is another fundraiser to underwrite marketing of the film in the hope of attracting a distributor, she said.

The film pieces together multiple generations of anecdotes about the fascinating tradition of greeting in Laguna Beach. The film’s structure begins in the present before jumping backward to the 1880’s. It provides a chronology of Laguna Beach’s greeters starting with Old Joe Lucas before moving on to Eiler Larsen, Number 1 Unnamed Archer and Michael Minutoli. The film doesn’t have a single dominant narrator and instead uses testimony from a wide range of people, both local residents and tourists, to drive the narrative.

In the course of excavating its dominant theme, the directors also capture the town’s history. The chronological documentation of greeters simultaneously reveal Laguna’s development over 100 years, giving newcomers real insights into the city’s evolution. The directors show their understanding of Laguna’s eccentricities, where quirky characters do things differently. One resident interviewed in the film humorously compared it to a “witness protection program town,” raising applause from the local audience.

The film’s greatest achievement is providing viewers with small, fascinating details about these self-appointed greeters. The film details Larsen’s adventurous life, his job as a gardener, his bellowing voice and the time he instructed celebrated writer Arnold Hano, “Don’t answer back.” The film documents the various catch phrases of the different greeters, such as “you’re perfect” and “happy Laguna Beach.”

The film delves into the characters of these men and why they make the extraordinary commitment of time and effort. Laguna’s current greeter, Minutoli, receives the most attention and his high-energy, party crashing, sleep-avoiding character is laid bare.

The film closes with a positive message. The ending leaves viewers with a clear reminder to enjoy the present, friends and family, and to not get caught up in daily stresses.

In its final seconds, the film reveals a question posed by many who observe Minutoli every morning. What does he listen to in those headphones? His top three artists: Elvis, David Bowie and The Rolling Stones.

George Gore Browne is a journalism student and a Laguna Beach Independent intern. 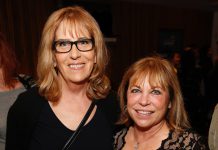 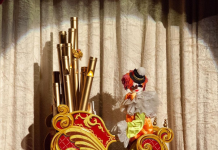