A Tale of a Girl, a Garden, and an Elf

Decades ago, I read to our then-young sons the Dr. Seuss classic, “The Lorax.” What a powerful, imaginative book that was. In his inimitable style of wordplay, the author taught children, and by inference their parents, about air pollution, the value of trees, and the importance of young people taking action to preserve nature’s gifts.

Though I’m assuredly not an authority on children’s books, until very recently, I’ve not read one that comes close to moving me with an environmental message like “The Lorax.” Having just finished reading “Alani and the Giant Kelp Elf,” written and illustrated by Gayle and Tom Joliet, I have to say this book hits many of the high marks I would look for in children’s environmental literature. 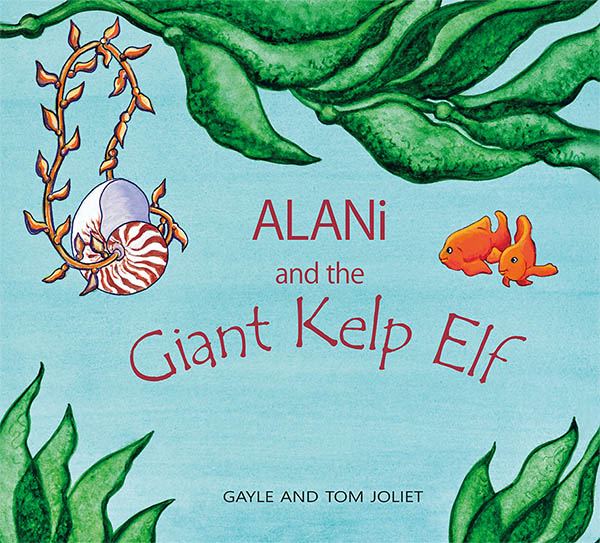 Part of the setting for this fable for our time is the Laguna Bluebelt, that is, the band of coastal water along much of Laguna’s coast that has been designated a Marine Protected Area, where fishing has been restricted and, in some cases, prohibited. Decades ago, overfishing and urban runoff pollution had taken a heavy toll on marine life, including the giant kelp. Ocean activists, led by the Laguna Bluebelt Coalition, advocated for and succeeded in obtaining in 2012 MPA legal status for a swath of our city’s gem-like coastline. This was an impressive environmental achievement about which numerous local newspaper accounts have been written. Until now, however, none of these accounts have told the story for children, the inheritors of this legacy who will one day need to be the stewards and guardians of Laguna’s marine life and habitat.

The girl (Alani), the garden (South Laguna Community Garden Park), and the elf (sculpture) all exist in real life. What is fictional is the richly textured, imaginative, and poignant story spun around and connecting all three.

Here’s what happens. On her way home from school, young Alani visits our local community garden and while watering plants sees “a beautiful nautilus shell shining in the sunlight” attached to “a rubbery seaweed stem.” The real world is left behind when Alani slides down an underground “lava tunnel,” with the nautilus shell necklace in hand, and learns that she had been summoned by an elf named Kelfie, who represents undersea elves worldwide seeking help from humans to stop polluting and overfishing their local waters so that kelp habitat and fish stocks could be replenished. Without giving away subplots mixed in with non-fictional developments involving community garden events, I’ll just say your children and grandchildren will love this book.

Having worked a raised box of vegetables with my wife and others in the neighborhood, ever since the community garden in this tale was created, this sanctuary seems even more hallowed and sacred than ever. After all, our gardeners have grown friendships along with vegetables, and the creative juices of wife and husband Gayle and Tom Joliet have now given us an elf sculpture and a lore that endear this enchanted public space even more to all who experience it.

That’s not all. Because the authors are retired elementary school teachers, there’s more than a spoonful of education in their book; there’s a whole dollop. Graced by the same evocative artwork appearing on every page, at the end, the authors provide renderings of kelp creatures and a simple glossary of marine science terms moving alphabetically from “canopy” to “sea urchin,” and highlighted by a fascinating four-paragraph explanation of “Giant Kelp – Macrocystis pyrifera.” Evidencing a global and comparative mindset, they note: “Giant kelp forests are common along the western coast of North America from Sitka, Alaska, to Baja California, Mexico. It is also found in the southern oceans near South America, southern Australia and New Zealand.” Think globally and act locally to preserve this marine resource was a major takeaway of this book for me.

Laguna Wilderness Press is to be credited with producing such a handsome, first-rate children’s book. I’m placing my copy on the shelf right next to “The Lorax.”