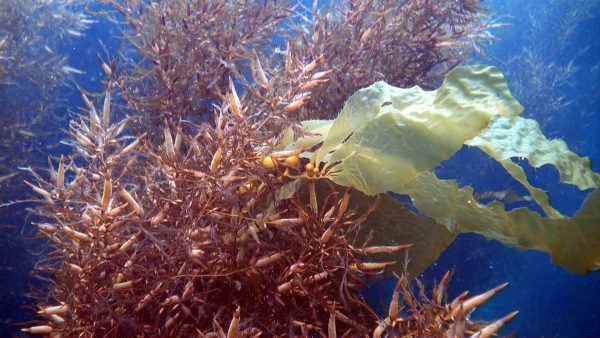 The “devil weed’ is invading the giant kelp forest along the Laguna beach coastline.

By Rita Robinson, Special to the Laguna Beach Independent

A petition asking the California Fish and Game Commission to allow the volunteer removal of Sargassum, aka “devil weed,” which is invading the giant kelp forests along the Laguna Beach coastline, was denied last month.

The request was submitted by marine biologist Nancy Caruso, who was instrumental in replanting 25 acres of kelp off Laguna Beach starting in 2002. Within the following 12 years, that grew to 100 acres of thriving kelp beds and an abundant biodiversity of native fish, algae, mollusks and crustaceans.

The commission denied Caruso’s petition to pull sargassum at Crystal Cove State Marine Conservation Area. The denial also stated that the commission had previously nixed requests for volunteers to extract invasive species within any Marine Protected Area. That, too, doesn’t make sense to Caruso.

Many protected wilderness areas, including Bolsa Chica Ecological Reserve, Laguna Coast Wilderness Park and the Irvine Ranch Conservancy, heavily rely on volunteers to remove invasive species, such as black mustard, which eliminates food sources for native animals and denigrates the entire ecosystem. Caruso likens sargassum to black mustard, saying the same principal applies to weeds under the water as well.

The report suggested that Caruso take her petition to the state Department of Fish and Wildlife, which she had already done in August, and which was also denied. She had asked the DFW to let her study sargassum in Crystal Cove for four months to see if it was preventing kelp from growing.

In the Crystal Cove MPA, people are allowed to fish, take lobster and remove urchins. “So the only thing they’re protecting there now is the sargassum,” she said.

Mike Curtis, a retired marine biologist instrumental in the 2002 kelp reforestation, said Caruso just needs to “live with it … She’s in for an insurmountable task,” said Curtis, who replanted kelp alongside Caruso. “It’s all over the world now.”

Curtis agrees that the local kelp beds are scrappy-looking but attributes it to the warm waters of an El Nino, which brings currents from Mexico north. Kelp thrives in much colder water, ideally around 57 degrees, growing a foot a day.

Mike Lyons, a senior scientist for MBC Aquatic Sciences in Costa Mesa, compiles data from aerial surveys of local kelp beds, a job Curtis used to do for MBC.  The 2019 MBC annual report revealed that nearly 95 percent of kelp floating on the ocean’s surface was gone. “It wasn’t a good year for kelp,” Lyons said, adding that 2020 looks only slightly better. 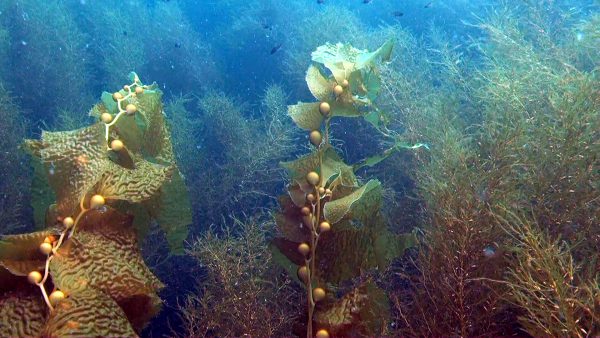 He doesn’t discount sargassum, said to have ship-hopped from Japan, as a contributing culprit. “When the giant kelp suffers, some of these other plants are allowed to take off. Once sargassum gets established, it’s hard to get rid of it,” he said. “You need some sort of catastrophic event like a major storm to uproot it and knock it out.”

Bill Bushing, Ph.D., a long-time marine scientist and diver from Catalina Island, is responsible for nicknaming sargassum “the devil weed.” He sees the invasive species as a monoculture similar to a corn field.

“Biodiversity at these sites plummets,” he said. “By crowding out the native seaweeds, it removes food sources for our local invertebrates and fish.” Native herbivores don’t eat sargassum because it’s toxic, he said.

The state DFW addresses invasive species with its Aquatic Invasive Species Management Plan. “It’s a double-edge sword because you do nothing and harm is happening but, if you do something, you may create problems as well,” said Martha Volkoff, environmental program manager for the invasive species plan.

Those problems include dislodging native animals using the invasive as a surrogate for protection, nesting or food. That’s exactly Caruso’s argument for moving faster, especially since sargassum already smothered native algae in local tidepools, which are now nearly deserted due to lack of food source.

Volkoff is encouraged, though, with prospects for monetizing the removal of sargassum, such as its potential as fertilizer, paper and biofuel. “There are some markets that are interested in it and, in partnership, there are some opportunities to manage a non-native for benefits to environment, for benefits to the economy,” she said. “We just need to work through the process so that the other natural resources are protected.”

Undeterred and bolstered by 636 letters of support sent to the commission, Caruso began conducting her own scientific survey Dec. 30. Nothing short of a major storm herself, Caruso will “ground-truth” the kelp vs. sargassum battleground on the ocean floor. She’ll submit the data to the commission, again requesting to remove sargassum to give kelp a fighting chance.

The commission has precluded her from presenting any further requests until August, a year after her petition to the Department of Fish & Wildlife was denied.