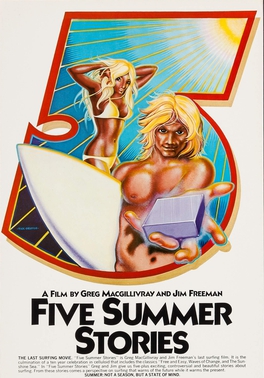 Before Laguna Beach resident Greg MacGillivray was nominated for Academy Awards for his IMAX films “Dolphins” and “The Living Sea,” before he managed to haul a huge, heavy camera up an icy mountain slope to film scenes for the IMAX film “Everest,” before he went to Hollywood and worked on such films as Stanley Kubrick’s “The Shining,” surf culture ruled his life.

He and longtime friend Jim Freeman formed MacGillivray Freeman Films in 1963 and began shooting 16mm surfing films, which captured the surf culture in cinematic time capsules, culminating in 1972 with their final surf movie, “Five Summer Stories,” widely acknowledged as the best surf film of all time. The film captured the joy of surfing, with a backdrop of the political and environmental issues of the time, plus a notable soundtrack by The Beach Boys and Laguna Beach band, Honk.

Now, MacGillivray Freeman Films has released a special 50th-anniversary version of “Five Summer Stories” that had its premiere August 10 at the New Port Theater in Corona del Mar presented by Quicksilver. The film will have special screenings at nearly 100 theaters throughout the country, including several in southern California over the next two months.

Sam George, the former Senior Editor at Surfing Magazine, moderated a discussion prior to the New Port Theater screening between MacGillivray and Bob McKnight, co-founder of Quicksilver, a popular brand of surf-inspired apparel and accessories based in Huntington Beach.

George told the sold-out audience that he remembered seeing “Five Summer Stories” for the first time in the early 70s and noted that he and others in the audience “had no idea what we were about to see. We had seen plenty of surfing movies, they were crudely filmed, no theme at all, the music was whatever they had on their eight tracks. We assumed we were going to see another surf movie, so you can imagine how stunned we were when ‘Five Summer Stories’ came alive on the screen. It was like nothing we had ever seen before. The quality of the cinematography, the music that was written for the film, it was nothing we had seen.”

George said the film presented a perspective of what surfing was at the time and what it could be.

“It was a hugely effective film, and changed the perspective of the surfers who watched it.”

Years later, George became the editor of Surfing Magazine and wrote an article about surfing films. In the article, he noted that among the many surf films that had been made, only two were classics: Bruce Brown’s 1966 film “The Endless Summer,” and “Five Summer Stories.”

“If you look at the quality and audacity, ‘Five Summer Stories” would have to be the greatest surf movie ever made,” said George.

He asked if MacGillivray had any idea that he was elevating the artform of surfing when he made “Five Summer Stories.”

“That’s what Jim and I were trying to do with the super slow-motion photography,” replied MacGillivray, who grew up in Newport Beach and attended Newport Harbor High School before moving to Laguna Beach. “We had two cameras to shoot 200 frames per second so we could slow down the water droplets. This had never been seen before.”

Never before seen because MacGillivray and cinematographer Bud Brown invented cameras that could shoot at 200 frames per second. He also invented a super telephoto lens to capture close up surfing footage from the shore.

For their initial screening of “Five Summer Stories,” MacGillivray and Freeman rented the Santa Monica Civic auditorium, which held 3,000 people.

“The film was shown in stereo through the best sound system you could get at that time,” MacGillivray told the NB Indy. “The magnetic film carried the soundtrack, separate from the film, so there were two machines—one running the film, the other running the soundtrack. Both had to be in synch with each other. We’d bring in our own speakers, gigantic rock and roll speakers, and a gigantic amplifier It was like a rock concert. If you saw the film in one of its first 10 runs in So Cal, you were treated to this stereo sound that was magnificent. And you have music by Honk and the Beach Boys. We were able to showcase that wonderful music with this great sound system, and give kids an experience they hadn’t had at a surf movie, ever. It was truly mind blowing. For an hour and a half, you are just taken away. It was one of those transformative experiences that I’ll always remember.”

Things did not go smoothly that initial screening. Someone has printed bogus tickets, so the biggest crowd ever at the Santa Monica civic – 3,500 – showed up.

“People were lining the walls, sitting in the aisles,” said MacGillivray. “I don’t think I have ever been to a film screaming or a rock concert that had that much energy and enthusiasm. The film had never been seen before so people didn’t know what they were going to get, so when it hit the screen basically they were screaming. It was the most fun I have ever had at an event, although I was panicked because we were trying to make the equipment run perfectly.”

MacGillivray said there was an intermission which was almost as fun as the film itself. A writer from Rolling Stone Magazine wanted to interview him, and said in her review that MacGillivray seemed like an algebra teacher.

“I still seem like an algebra teacher,” laughed MacGillivray. “I was a math major in college, and Jim was pre-med. Our hobby was filmmaking. Actually, 90 percent of our life was filmmaking, which is why the 12 years we spent together before Jim was killed was such a seminal experience for me. We learned from each other and pushed each other every day.”

MacGillivray proudly noted that he and Freeman never got a loan to make their movies, and never borrowed from their parents. They paid off their films before they showed them.

MacGillivray has a word of advice for aspiring filmmakers, or anyone pursuing a career in the arts.

“If you have a good idea and you believe in it, just follow your idea and don’t listen to other people, they are going to misguide you. That’s what Jim and I believed.”

“Five Summer Stories” had a notable effect on McKnight, who said that he was smitten with surfing in 1963 and made regular trips from his home in Pasadena to Huntington Beach and Newport Beach.

“All of us, we don’t realize the influence we have, him with film and me with apparel, so many things that have come from our world that has formed a huge industry globally,” said McKnight. “With ‘Five Summer Stories,’ watching (surfer) Jerry Lopez going slow motion to the Honk soundtrack is something I will never forget.”

George asked MacGillivray why he decided it was time to re-release “Five Summer Stories” on the big screen.

“We made the film 50 years ago, and a lot of my buddies are dying, so I thought I’d better show it now,” said MacGillivray, which elicited laughter from the audience. “To look back 50 years and what was going on in 1972—upheaval, the  Vietnam war, surfers and hippies rebelling because the environment was not being respected. The first Earth Day occurred in 1972, and 10 percent of the population attended earth day events, which is unheard of. That’s 25 million people. That started a new wave of consciousness, and that’s what started us making films about the planet. Since then, 28 laws were passed by congress that started the clean air act and clean water act, and EPA. Those things are still in place today and make our lives better. All that started back in 1972 when this film came out. That’s the reason.”

MacGillivray noted it’s been more than 40 years since “Five Summer Stories” has been screened in a theater. He remastered the soundtrack and spend six months on making sure the 50th anniversary version is the best one yet.

MacGillivray has a new book entitled “500 Summer Stories” due out this November that offers myriad anecdotes and insights to his career making surf films and IMAX movies.

The book includes 40 QR codes that when scanned takes reader to additional never-before-seen footage that highlight the stories MacGillivray is sharing.

MacGillivray said he had the QR idea several years ago, but when COVID hit and people had to scan restaurant menus, he realized it might work.

“Before Covid the acceptance of the QR codes were nil, ad agencies tried it and it didn’t work, then Covid his and it taught people how to use QR codes,” said MacGillivray. “Then I realized it would work. Hopefully when people come to a QR code, it fits into the story telling and you get the feeling of being there. I think it will add a lot to the overall enjoyment of the book.”

“Five Summer Stories” will screen at San Clemente Metrolux 10 on Sept. 12 at 7:30 p.m.. For a complete list of local screenings, visit https://fivesummerstories.com.