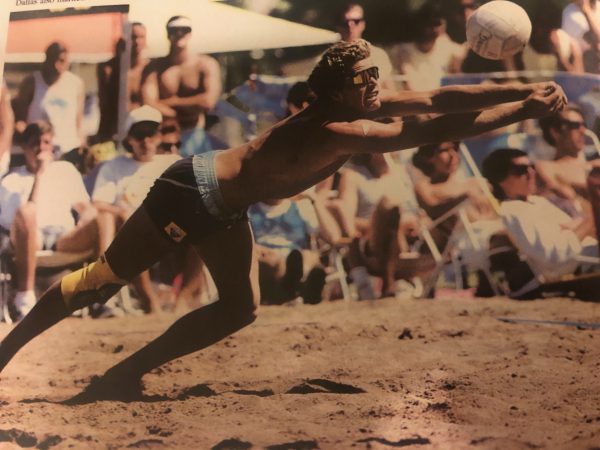 Youth volleyball is returning to Laguna Beach with the launch of Laguna Coast Volleyball Club (LCVC), formed by Laguna Beach High School alumni Leif Hanson and Craig Thompson. The nonprofit is dedicated to teaching local youth proper volleyball fundamentals in a positive and fun environment. LCVC organizers said they will strive to develop competitive players who are passionate about the sport.

Hanson was born and raised in Laguna Beach, where he started playing volleyball at the age of 11 on the blacktop courts of El Morro and beaches throughout Laguna, and then a couple of years later at Laguna’s first volleyball club. Hanson graduated from LBHS in 1983. During his time there, he won three CIF titles and earned 1983 CIF Player of the Year. He went on to star on the indoor team at the University of Hawaii. Afterwards, he became a top pro beach volleyball player on the AVP Tour, where he won both AVP and FIVB events around the world. Hanson still plays beach volleyball in Laguna, as well as indoors representing the USA in the Masters division throughout Europe.

Thompson was the original coach of the Laguna Beach VBC in the 1970s. The club was created by his uncle, Rolph Engen, local volleyball Hall of Fame player, and was the first youth volleyball club in Southern California. The results were historic, including league, county and multiple CIF championships. Thompson played at UCLA and was head men’s coach at UC Irvine. Many other LBVB alumni have lent their support and talents to the club’s creation, including two-time Olympic medalist Dain Blanton.

The new LCVC was formed from Hanson’s and Thompson’s desire to bring back a local youth volleyball program for the first time in over 12 years.

“I wanted kids to have an experience like I did growing up, playing club volleyball in Laguna Beach with my friends that I grew up with,” said Hanson, the club’s president. “We have lost a lot of community involvement here in Laguna Beach that I myself and many others are looking to change.”

LCVC has assembled a coaching team with experience at all levels of volleyball and strong ties to Laguna Beach. Hanson said all of the coaches love working with young athletes and share their excitement for the sport.

The club has scheduled three six-week clinics for elementary and middle school kids starting Feb. 4. The clinics will be held at Thurston Middle School.

Registration for winter clinics can be found at www.lagunacoastvolleyball.org or by contacting Jill Halbert at 949-230-0504 or [email protected] Any other questions about the club can be directed to Leif Hanson at [email protected]

Are Laguna Beach winter sports back on?